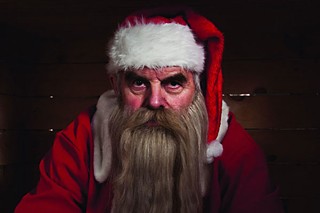 
Jalmari Helander, writer/director of the Finnish gem Rare Exports: A Christmas Tale, knows the real Santa Claus was not born of a Coca-Cola sugar high but from a hideous brew of Scandinavian paganism and puritanism. The Finns say he dwells under the peak of sharp Korvatunturi fell, all the better to hear which children have been naughty and nice. This Sinterklaas cares little for knee-sitting and gift-giving; he's all about the naughty, a vicious and unrelenting punisher of wickedness, with a cannibalistic edge. As Pietari, the boy who knows that Santa isn't all presents and eggnog, Onni Tommila adds a Home Alone candy coating to this seasonal cousin to The Thing. Yet Macaulay Culkin's First World problems would leave Pietari unphased as Helander straps a leathery toughness onto the boy hero and the lives of Finland's indigenous Sami people. A rough, gruff folk up to their arms in reindeer meat and snowdrifts, Helander gave them and the Rare Exports narrative a dry run in two ingenious early shorts, both of which are snuggled up in the extras, while Oscilloscope added Pia Zadora's 1964 misfit toy Santa Claus Conquers the Martians exclusively to the Blu-ray edition. Extra gift or coal in your cinematic stocking? You decide.

Helander's box of delights actually first came down Austin's chimney back during Fantastic Fest 2010, the same year that Adam Green hosed down the same audience with Hatchet II's goregasm. Now he returns to the small screen with the decidedly family-unfriendly Chillerama, which can be summed up in one word: outrageous. That's the idea that drives this microbudget anthology title, directed by four humongous film nerds raised on Famous Monsters of Filmland and The Kentucky Fried Movie. Drenched in highly inappropriate cinematic references (you'll never hear a Wilhelm scream in the same way again), it features more bad puns and genital mutilation than an Antichrist porn spoof. Adam Rifkin (Detroit Rock City) lubes up for atomic monster sexcapade "Wadzilla," Green goes James Whale hunting with only "The Diary of Anne Frankenstein" to guide him, Tim Sullivan (2001 Maniacs) finds the leather daddy beach-bopper "I Was a Teenage Werebear," and Joe Lynch (Wrong Turn 2: Dead End) gets his hands dirty on Seventies schizer shocker "Deathication." Lynch has the toughest challenge as he also helms "Zom-B-Movie," the framing mechanism set on the last night at the Kaufman Drive-In. He actually adds something new and NSFW to the revenant trope, whereas Sullivan's lycanthropic riff on the gay subtext in 1960s teen movies is nowhere near as clever as it thinks it is and a fraction as funny as it needs to be. Good thing that Green sews a love for Young Frankenstein deep into the sinews of his retro-pastiche. The shorts genius plays resurrection man on Mel Brooks' comedy classic, and it works because it is just as fearless and just as respectful of black-and-white genre classics. Joel David Moore's bumbling Hitler vs. Kane Hodder as Meshuggeneh, the laconic Jewish creature, has genuine belly laughs as well as a series of trilingual translation jokes so subtle it needs a commentary track explanation. He may have stolen any last trace of subtlety from "Wadzilla," but horror fans will thrill to see that Rifkin hired cult masters of perversity the Chiodo Brothers (Elf, Killer Klowns From Outer Space) to bring mad life to his massive mutant sperm.