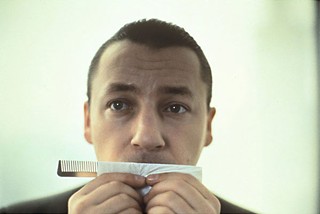 
In an essay included in this box set of Krzysztof Kie´slowski's mammoth last undertaking, the Three Colors trilogy, The Nation's Stuart Klawans sniffs at what he calls the "elaborate claim that each part of the trilogy represents a color of the French flag and a universal value promulgated by the French Revolution." Kie´slowski admitted that French funding as much as anything inspired the idea to parcel out the themes of liberty, equality, and fraternity per film, and the trilogy doesn't slavishly stay on message but rather obliquely flits at these ideas. Blue is about a widowed wife and mother trying to free herself from all vestiges of the past; White charts an impotent Pole's attempts to even the playing field with his scornful French ex-wife, in an unlabored allegory of post-Communist Poland's attempts to catch up to the EU; and Red follows the unlikely bond between a young model and an aging judge. Still, Klawans continues, "It might be just as well to match the titles to the lead actresses' hair color and call the films Brunette, Blonde, Redhead."

He's referring to the stunning triumvirate of Juliette Binoche, Julie Delpy, and Irene Jacob, who headline these thematically and tonally unique films. Unlike the other two female-led pictures, Delpy's unforgiving Dominique is secondary in White to that of the hero Karol (Zbigniew Zamachowski), whose storybook trajectory begins with limp-dick mortification; rises as Karol becomes an entrepreneur in giddy, lawless Warsaw; and ends in triumphant revenge against his ex.

White is a rare comedy in Kie´slowski's catalog – "you won't laugh your head off," he warns of the film's droll charms. Equality is White's assigned ideal, but it could just as easily be swapped out for another: What else but fraternity unites Karol, broke and stranded in a Paris metro station and playing a mournful Polish folk song on his comb kazoo, with Mikolaj (Janusz Gajos), another Pole out of sorts and hungry for human connection, who is crucial to ferreting Karol out of France and back to his native Poland in time for that astronomical rise? Or what of the notion of liberty? Later, Mikolaj will ask Karol to kill him – to free him of his misery. "We all know pain," Karol assures him. "Yes, but I wanted less of it," Mikolaj shrugs back. Nope, you won't laugh your head off, but are a wry smile, the ache of understanding, and that peculiar pleasure of Eastern European gallows humor any less worthy?