To Preserve and Project

Conventioneers aren't exactly rare birds in Austin, but the ones wandering the streets this weekend may look a little different, with necks permanently cricked upward – not to the sky, but to the big screen. They are members of the Association of Moving Image Archivists, whose jobs are to preserve, to project, to educate, and to inspire – and if I sound a little holy about it all, well: How many of your memories revolve around movies? That's what I thought.

More than 600 archivists will attend this year's AMIA conference, held Nov. 16-19 at the Hyatt Regency, and will include representatives from the Austin-based Texas Archive of the Moving Image. (Incidentally, TAMI founder and University of Texas professor Caroline Frick begins her two-year term as AMIA's next president this weekend.) The conference itself is closed-door, but what's wide open to the general public is a handful of free events that get at the heart of what the archivist association is about.

On Friday, Nov. 18, at 9:30pm, Austin artists Barna Kantor and Scott Spark present Seeding the Clouds: Film on Fog at the Town Lake Gazebo, where the pair will "point their 16mm projectors at billowing clouds of pure cold steam." (They encourage the audience to bring their own reels for exhibition.)

Then on Saturday, AMIA takes up residency at the Paramount Theatre for an eclectic and entirely free day of programming, starting at 9am with a screening of We Can't Go Home Again, Nicholas Ray's experimental last film (see "We Can't Go Home Again," Aug. 5). At 10:45am, Mary Ellen Bute's Passages From James Joyce's Finnegans Wake (1966) screens (Roger Ebert called it "an essential film for readers of Joyce and an interesting film for the rest"), followed by a 1pm program called Amateur Night: Home Movies From the American Archives. At 3pm, the newly restored 1977 documentary Word Is Out: Stories of Some of Our Lives plays; it's notable for being the first doc about gay and lesbian identity, made by gay and lesbian filmmakers. Finally, at 8pm, the Paramount does the time warp to 1937 with cartoons, trailers, a short film, and a new (and hardly seen yet) restoration of the Technicolor screwball comedy Nothing Sacred starring Carole Lombard and Fredric March. 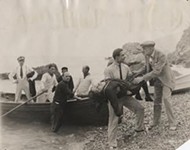