Love is a battlefield in the comedies of remarriage 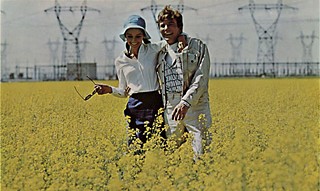 Audrey Hepburn and Albert Finney in Two for the Road

When the Austin Film Society's longtime, indispensable programmer Chale Nafus asked me nine months ago to guest-curate an Essential Cinema program, I was over the moon. This series, its topic – really, this tiny but mighty obsession of mine – had been gurgling around my brain for years before I even knew what to call it. The comedy of remarriage, it turns out. Philosopher Stanley Cavell was the first to coin the term in his 1981 book Pursuits of Happiness, but I'm not going to push you to pick up your own copy. (Let's just say it reads, quite accurately, like it was written by a philosopher.) Cavell's book restricts itself to the screwball comedies of the Thirties and early Forties, and certainly a whole series could've been built around curling up to those classics. But the essential idea – that of couples who break up in the first reel and spend the rest of the film scrapping their way back together – is one that's been regularly revived over the decades and refitted to reflect each era's social and marital mores.

In the last nine months, I've written short descriptions of the five films I selected for the series, then longer descriptions, then even chunkier program notes – upward of 10,000 words, I'd wager. When I sat down to write this piece for the Chronicle, I wondered if I had any words left. And then I realized that, for all the tidbits about Cary Grant's reluctant comic persona in The Awful Truth and Preston Sturges' pre-Palm Beach Story career as the inventor of kiss-proof lipstick, screenwriter George Axelrod's acid-tongued anti-marriage itch in Phffft! and Two for the Road's oh-so-continental attitudes about infidelity and Eternal Sunshine of the Spotless Mind's sci-fi/philosophic spin of the wheel, I'd never really gotten around to talking about what magnetized me in the first place to this peculiar subgenre of a larger genre so sniffed upon.

Nobody looks to romantic comedy for truth. It's a make-believe place where silly constructs such as mistaken identities, missed phone calls, and overcooked misunderstandings all conspire to keep lovers apart until the final reel, when they go skipping off into happily ever after. (Don't get me wrong: I love the genre dearly.)

But the comedies of remarriage begin at the end, when the shine has rubbed off – when happily ever after has gone belly-up and man and wife have devolved into squabbling and battle scars, their once shared ideals now undone by miscommunication and anxieties. This is sounding like a downer, isn't it? I swear it's not. Because the marvelous thing about these comedies of remarriage is that, even with a central thesis that love is hell, each of these films, plucked from different decades, winds up at the same conclusion with a shrug and a smile: Love is hell, sure, but you might as well have a sense of humor about it, right? It's all still some beautiful make-believe, but this is the kind of make-believe that makes you believe it's worth the fight.

And It Feels So Good: The Comedies of Remarriage

comedies of remarriage, AFS Essential Cinema, And It Feels So Good: The Comedies of Remarriage, The Awful Truth, The Palm Beach Story, Phffft, Two for the Road, Eternal Sunshine of the Spotless Mind