The heartachey animation of Don Hertzfeldt 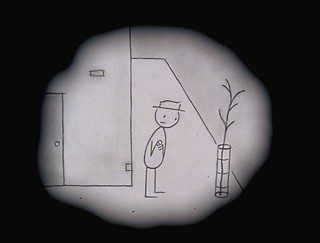 Don Hertzfeldt's "Bill" trilogy capper, "It's Such a Beautiful Day"

I had an anxiety dream this morning after I hit the snooze button on my iPhone. In it, I'd already woken up and was about to begin rewrites on the piece you're reading now, but someone had come into my home overnight and rearranged my writing table, which is usually, like the work areas of most writers, set just so. Now, the whole table canted scarily to the left; my thesaurus had toppled onto my computer, shattering the monitor; and the whole place was covered with a thick patina of dust and cobwebs. The shower was running, but no one was in it, and outside my large windows, sleet was coming down. The power was off. My ability to hit my deadline was in question, and the panic began to set in.

In fact, I felt in this dream very much like Bill, the hapless and beleaguered stick-figure character from the films of Santa Barbara-to-Austin transplant and Academy Award-nominated filmmaker Don Hertzfeldt, whose painstakingly hand-drawn and photographed animations have, since 1995, tapped into not only his own anxieties but also those of anyone who has ever felt like an underprepared and overanxious everyman (or -woman) buffeted by the vicissitudes of an uncaring or downright hostile universe.

Hertzfeldt's films have always been weirdly affecting creations, Kafka-esque odes to our fragile human condition. Their characters move in and out of reality, psychosis, and the banal and the bizarre in a way that no other living creator of animated film is doing. (His closest compatriots, and frankly they're not that close, might be Jan Švankmajer and the Brothers Quay.) His films are uneasy dreams, more often than not pitched just this side of reality, which, in his art, is a slippery, treacherous plank bridging an abyss of personal dislocation and disassociation. Watching them, you're immediately struck by his ingenious misuse of traditional narrative tropes – he provides the narration in a quiet, almost clinically soothing tone of voice – which has come to include all manner of experimentation, going far beyond the early, fourth-wall busting work of Dave Fleischer's disarmingly surrealist Betty Boop and Pudgy shorts. Watch enough of Hertzfeldt's animated existential angst grenades, and you're likely to need a good, stiff drink and a hug from your mom.

Increasingly, the intensely focused and hypercreative Hertzfeldt's short films have lengthened and begun to employ, as he says, "some very weird hybrid digital effects ... lots of it shot through broken glass, cheap plastic magnifying lenses, even weird plastic toy packaging ... and playing with multiple exposures and light effects is still part of the fun of working with these old cameras."

Now Hertzfeldt is about to embark on a multicity tour to unveil the third and final chapter in his Bitter Films' "Bill" trilogy, "It's Such a Beautiful Day," which follows 2006's "Everything Will Be Okay" and 2008's "I Am So Proud of You." He launches the tour with a two-night berth at the Alamo Drafthouse next week.

Although his films are among some of the most influential and intellectually chewy examples of animation ever created, he remains, thankfully, the very definition of a cult filmmaker, praised for the better part of two decades by everyone from The Austin Chronicle – we've championed his work since we first saw 1995's heartbreaking "Ah, L'amour" at a Spike & Mike's Sick & Twisted Festival of Animation at the old 409 Colorado Drafthouse – to The New York Times and practically every other venue with an eye on the cutting edge of animated filmmaking.

And yet Hertzfeldt, whose achingly expressive yet utterly spare line drawings are handmade one at a time and then photographed single shot by single shot by single, painstaking shot (and which can and do take years to complete), remains untroubled, even content, with his lack of mainstream notoriety: 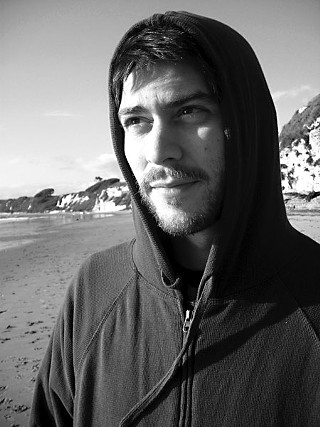 "Oddly, sometimes I wonder if my general lack of success over the years has been the best thing for the films. I've never had a big payday, and I've turned down all the commercial work. Whenever I had the occasional idea to pitch a large movie project flame out in Hollywood, I could always return to the shorts, where I could come up with an idea one day and just start animating that weekend.

"If I wasn't working on something all the time, I'd have nothing new to release the next year, and no income, so I could never take a break. So I've been kept literally and figuratively hungry for a very long while. Not so great for me, but a lot of blood, sweat, and tears got poured into the films, and they were probably the better off for it.

"But with 'Beautiful Day' finally finished now," he adds, "I think I'm ready to shift gears a bit, and that might be the last short I make for a while."

(Notably, Hertzfeldt, who moved to Austin one year ago, turned up in his friend and fellow filmmaker Geoff Marslett's segment of Slacker 2011, playing the "TV Backpacker" puppet alongside Heather Kafka.)

Hertzfeldt, who took his work and the work of many others on the road with friend and fellow Spike & Mike alumnus Mike Judge and Bill Plympton for national tours of the Animation Show starting in 2003, is keenly aware that the number of theatrical venues available for animated film compendiums is dwindling. Part of this, of course, has to do with the rise of YouTube and other Internet-based sites that allow potential audiences to click and avoid the hassle of leaving the house to go sit in a big, dark room with other (possibly strange) people.

And, too, the era of sitting cross-legged on the floor every Saturday morning with a bowl of Trix and two hours of Looney Tunes is, seemingly, well behind us. Around and in front of us? Adult Swim and myriad offerings of the Cartoon Network. So where does Don Hertzfeldt's disconcertingly beautiful style of hand-drawn, hand-shot animation fit in? Watching it can be a draining – in a good way – experience, but animating it? Over the course of years, locking his sheafs of drawings in a fire-proof safe for fear of the worst?

"Draining, yes, true," Hertzfeldt agrees. "But not so much due to the storyline, I think, more so just from the nature of the work. Probably less than 10 percent of what I do is remarkably exciting, creative, sparkly, or fun. The vast majority of it – and this is probably true of every movie production – is terribly boring drudge work, long hours, mostly in isolation, days that sort of just seem to endlessly repeat."

(Note: An engrossing time-lapse video shot over the course of a few years – aptly titled "Watching Grass Grow" – gives an idea of the sheer tedium and intensity involved in what Hertzfeldt does as he animates his 2005 short film, "The Meaning of Life." It can be found here: www.youtube.com/user/t1i1b.)

"You're telling a story one frame at a time, in tortured, extreme slow motion," Hertzfeldt continues. "I don't mean to make it sound depressing, but often the hardest part is just getting up every morning and making yourself get back to work on it. 'Beautiful Day' took a little under two years, which isn't bad for something 23 minutes long. It's just two years without a break: I wrote it, animated it, shot it, directed it, mixed all the sound, narrated it, produced it, wrote music for it, and provided all the editing notes for it. By the end, you're just a pile of gray mush and it's impossible to watch the movie with any objectivity. It's a special sort of strange patience. I don't live like a monk, but I imagine monks would probably be very good at this."

An Evening With Don Hertzfeldt, including 35mm prints of the entire "Bill" trilogy, takes place Nov. 16-17, at the Alamo Drafthouse South Lamar. 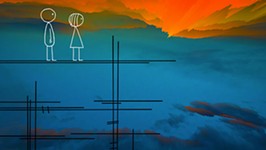 Don Hertzfeldt, It's Such a Beautiful Day, Everything Will Be Okay, I Am So Proud of You, Ah, L'amour, The Meaning of Life, Bitter Films, Geoff Marslett