The Shell They Sell (He's Swell)

In the big, fluffy cloud of feel-good viral videos, floating in the ether somewhere between kittens snuggling with baby goats and Ryan Gosling breaking up street fights is "Marcel the Shell With Shoes On." Released in summer 2010 – the same year it won Best Animated Short at AFI Fest and screened at Sundance – the sweet story of a tiny seashell with an odd voice has become one of the more equalizing, heartstring-pulling phenoms and sustained enough popularity for creator Jenny Slate (Saturday Night Live, Bored to Death) and writing partner/director Dean Fleischer-Camp to take their success to its logical modern conclusion: a brand-new children's book, Marcel the Shell With Shoes On: Things About Me, and a television deal.

"Dean and I are both sort of child-adults," Slate explains, "so maybe that's why Marcel turned out the way he did? Marcel's voice was certainly the first thing to pop up, and because it was so fun for [me] to do, and for Dean to interview, we began writing things down. It was just kind of fun to be around Marcel."

Indeed, that's the charm. Marcel touches the child-adult in all of us, earnest but funny in that unfiltered way children speak to adults in rushed tones, as if they can't take in their surroundings fast enough:

Guess what I use for a bean-bag chair?

A raisin. Guess what I do for adventure? 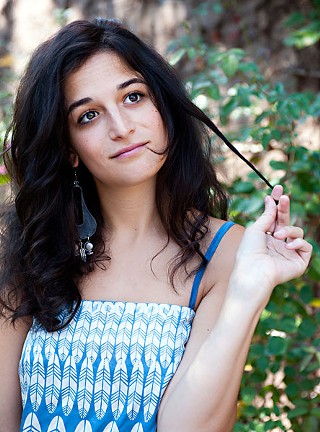 I hang glide on a Dorito. Guess what I use as a pen?

The book, illustrated with Amy Lind's soft-focus oil paintings, fleshes out Marcel's daily schedule a bit more, showing where he sleeps (a "breadroom," two pieces of white bread) and the little adventures he goes on. "He especially likes to sing," Slate adds, foreshadowing what will hopefully be a recurring bit on the show. You never wonder where Marcel is or why he's surrounded by full-size human things. That's the joke: a shell doing observational humor. He's got a few zingers, too.

"Some people say that my head is too big for my body, and then I say ... compared to what?"

While the duo is still in the early stages of the show's development, it'll be interesting to see what channel it lands on and who it's marketed to: children, adults, or that special new niche for child-adults (Yo Gabba Gabba!, Adult Swim). Their choices of favorite shows and books growing up might give a sense of what this odd little land-dwelling exoskeleton's so-called life could be.

Slate: "I loved Sesame Street and Square One. I used to just die to watch Teenage Mutant Ninja Turtles, DuckTales, the Ghostbusters cartoon, re-runs of The Monkees and Merrie Melodies. I hated Home Improvement. I have a billion favorite picture books, but the ones I can think of now are One Morning in Maine, Imogene's Antlers, Outside Over There, and the Bread and Jam for Frances series."

Fleischer-Camp: "Until I was 14, I didn't really do anything except watch professional wrestling and draw. I was like Harold and the Purple Crayon, just totally zoned out, wandering around, drawing on things. Probably not coincidentally, that was always one of my favorite kids' books, but I also loved anything with really striking artwork. I loved Round Trip, that book you could read right-side up and upside down because, jeez Louise, what a head trip."