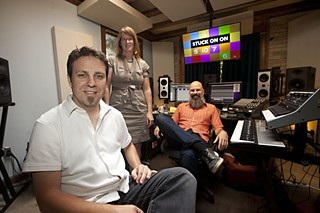 Your typical Hollywood postproduction studio, I'm told, is a world of glass and light. It exists on the top floors of skyscrapers; it exudes an air of money, resources, possibilities, scope, and Tinseltown confidence: Our army of technicians will turn your movie into something marvelous, it declares.

Stuck On On is a more unassuming operation. It isn't located in an office made of windows in a Downtown high-rise. It isn't bathed in sunlight. Rather, Austin's "indie post-production house," as one client calls it, sits on a quiet side street on the city's Eastside, sandwiched between a lumberyard and a furniture wholesaler. Its office has only a few small windows; the whole operation feels more like an underground laboratory than a thriving agency. The Stuck On On "army" consists of three people.

But Parke Gregg, the company's colorist, editor, and project finisher, and one of its three co-founders, believes it's that small-shop intimacy that has made Stuck On On so successful.

"Part of the Stuck On On attractiveness is our new model," says Gregg. "As soon as you walk in the door, you know you're in a different kind of place. Traditionally, post houses are great, but they're super expensive. We put a new twist with similar services and all in one place. More of a boutique approach."

Despite having only been in business together for four years, Gregg and his colleagues – composer/mixer/sound designer Lyman Hardy III and producer and head of business development Allison Turrell – have worked on many of the most significant movies to come out of Austin this year ... at least the ones that weren't made by directors with the last names Rodriguez, Linklater, or Malick. They include Where Soldiers Come From, Heather Courtney's documentary about members of the Michigan National Guard fighting in Afghanistan (see "War Stories," Oct. 7), which is showing on PBS' POV next month; Slacker 2011, the Austin Film Society's remake of/tribute to the seminal Austin indie film on the occasion of its 20th anniversary; and Take Shelter, Jeff Nichols' critically acclaimed thriller, which won the Critics Week Grand Prize at this year's Cannes Film Festival and is generating all kinds of Oscar buzz. (It opens in Austin this weekend; see our review.)

What those movies have in common is that they're independent, meaning not only that they have independent (read: artistic) sensibilities but independent (read: limited) budgets as well. Turrell believes those filmmakers came to Stuck On On because they realized that a quality postproduction job – editing, sound design, color correction – can mean the difference between an independent movie getting attention from critics and national distributors and an independent movie getting stuck on the festival circuit with thousands of other well-intentioned, aesthetically compelling, but amateur-looking and -sounding, doomed-to-obscurity films.

"The way technology has changed so dramatically over the last five or six years, the industry as a whole has changed; people are doing more with less," Turrell says. "A lot of people are trying to do everything themselves. Sometimes it works and sometimes it doesn't, so our whole approach was: You can do a lot of things by yourself, but in order for it to go to the next level and get a wider audience, it really has to have a finish. You may have shot it on your zip camera, but in order to reach a wider audience, it has to have a certain level of production value. It has to be audio mixed; it has to have some kind of look."

By the time Stuck On On came together in 2007, Hardy and Gregg had been working together, on and off, for almost a decade – since the late Nineties. Hardy, a drummer with local bands Ed Hall and Pong, had recently been recruited by friends to work as a composer for their new production house Action Figure. Action Figure's first big client was Tivoli, a successful software company specializing in server-monitoring technology. At the time, Gregg worked in Tivoli's marketing department, and he collaborated with Action Figure, and with Hardy, on the company's marketing videos. Eventually Parke would "jump the line," as he calls it, to the production side of things, working as a freelance film and video editor. Hardy, too, went freelance, and the two occasionally worked together over the next several years.

Turrell, a photographer and video artist, had just received her Master's of Fine Arts degree in photographic and electronic media from the Maryland Institute College of Art, "and she was pushing Lyman to do something a little more formalized," Gregg says. "As friends they took me out to lunch to pick my brain to see if I thought it would be a good idea to start an audio postproduction company. And I did think it was a good idea, but I thought it would be a better idea if we did a video-finishing side as well; that would be a really unique proposition, having them both in one small studio. There wasn't much discussion. We just said, 'Yeah, let's do this.'"

It was Hardy who would supply the company's name. Years before he'd lived in a house with a chandelier that wouldn't turn off. A roommate said it was "stuck on on," and Hardy filed the phrase away, enjoying its metaphorical possibilities: "At Stuck On On, the switch is broken, and we're always on," he says.

Stuck On On has flourished, Turrell, Hardy, and Gregg believe, first because it's the only self-contained, all-in-one boutique postproduction house in town, and second because they are creative types themselves, so they understand the value of having collaborators who not only possess technical knowledge but also understand and are sympathetic to the kind of investment of time and energy that goes into getting an artistic vision onscreen.

Turrell says: "Sometimes when filmmakers come in here, they've been on this superlong journey – working on the script, doing preproduction, actually shooting it, sometimes editing for years – so by the time they come in here, they really have to trust us and let go of this baby they've been working on that's their heart and soul. We have to make them feel comfortable and get what they're doing and their aesthetic and the story they're trying to tell. They walk in with one movie and leave with any entirely different movie they'd never even imagined."

In order to do that, the three have to convince their clients (and the clients they're hoping to get) that they're as committed to the project as the filmmakers are, that those filmmakers won't have to watch as their movies get shuffled anonymously along an assembly line.

"We use this as a real selling point: We really invest ourselves in these projects, and so we want projects we believe in so we can totally put ourselves into them," says Hardy. "We do it to our detriment, because we put in way more hours than we get paid for. When you're working on something like this, it takes over your life for a little while, and if you allow something to take over your life that you adamantly don't believe in, it's gonna be detrimental to your health."

Ultimately, postproduction – whether it's Foley work to add the sounds of birds, car engines, or shoes on the sidewalk, or color-correction to bring emotional depth and specificity to a movie's color palette – is about enhancing the world that a director was able to capture on film, to bring life to it. That's particularly important for indie directors, who often find themselves shackled on set by technological limitations, pressing schedules, and restrictive budgets that won't allow them to just sit around waiting for the wind to stop blowing or for the light to be just so.

By keeping their prices low, their operation intimate, and their hours long, the Stuck On On team frees filmmakers to make choices while shooting based on aesthetic concerns rather than monetary ones, confident that those choices will be fleshed out after the fact.

For example, director Heather Courtney shot Where Soldiers Come From using several different cameras for different reasons – 16mm and 8mm film cameras that allowed her to create the grainy, dreamlike shots of the unforgiving northern Michigan winter landscape, and both standard-definition and high-definition digital video cameras, which allowed her to shoot in her preferred vérité style but which gradually became outdated over the course of the four-year shoot. Upon returning to Austin, she and Gregg had to make all that footage look like one movie, to "up-res" the standard-definition footage to match the look of the high-def and to digitize the film footage so that it all worked together – so that the story of three young men whose lives are torn apart by America's seemingly never-ending war on terror wasn't lost in a sea of technical inconsistencies and inside-baseball technological doublespeak, none of which audiences will care about or forgive if the movie doesn't work.