Letting the Monster Out of the Box

Did Spalding Gray have any secrets left for his journal?

It's hard to believe there was ever a time when getting onstage and telling stories about yourself was considered an act of daring. These days it feels like everyone is practiced in the art of the autobiographical performance, from celebrities on Twitter to high school students who treat YouTube like a confessional. That there was a time before all this, when privacy was cherished and there was a line between performance and performer, sounds quaint – almost ridiculous.

But that's the world actor/writer Spalding Gray was living in when he premiered his first solo stage show, Sex and Death to the Age 14, in 1979. With little fanfare, that show shook off the inherited expectations of the theatrical monologue – where a lone performer would perform as a different character or characters in service of a story – by being simply an autobiographical portrait. Gray's great theatrical achievement was to turn the stage into an analyst's couch. By 1983, when he premiered his greatest piece, Swimming to Cambodia, Gray's act of rebellion had become the starting gun for an autobiographical revolution in the theatre. Enter Eric Bogosian, Henry Rollins, David Sedaris, and a solipsistic cast of thousands.

During his nearly 30 years as a man onstage alone, Gray perfected the art of turning his life into art – or as he once put it, "making the private public." Which makes publishing his private journals rather an odd endeavor. After all, what can readers legitimately hope to find in the diary of a man who, both by artistic design and personal predisposition, held nothing back?

We imagine that's a question that will be addressed by Nell Casey, the editor of the newly published The Journals of Spalding Gray (Knopf), when she appears at this weekend's Texas Book Festival. While compiling the material that would end up in the book, Casey waded through thousands of pieces of Gray's writing, from journals to notebooks to performance notes.

"It was overwhelming," Casey told the Chronicle. "I estimate there were about 5,000 pages. Though when I started to get into it, there were themes that emerged about his life that were very clear, that were in some ways covered in his monologues but were much more deeply explored in the journals: his mother's suicide, his childhood wounds, his neuroticism, his depression, his fear of giving away his life. And as those themes emerged, they gave me a road map for what had to be represented in the journal." (All of that unedited material was acquired last November by the University of Texas' Harry Ransom Center and was made available to the public last week.)

Gray, who was a creature of New York's experimental downtown theatre scene, found something like fame with the filmed versions of his monologues, which were directed by some of the most influential and intriguing filmmakers of the Eighties and Nineties, including Jonathan Demme (Swimming to Cambodia), Steven Soderbergh (Gray's Anatomy), and Nick Broomfield (Monster in a Box). Despite the impact those movies had on his career and his life, the man who seemed to write about everything is curiously quiet in his journals on the subject of his movies, mentioning them only to point out how "depressing" their receptions by certain critics were or what "failures" some were artistically.

"There's an odd silence in the journals at this incredible moment in his life [after Cambodia was released]," said Casey. "Perhaps he was busy at the time, or perhaps he didn't realize what a turning point it was in his career."

Gray's journals show a man who was constantly walking a line between trying to keep something for himself and believing it was his artistic duty to share everything with his audience. "A big part of his private life was his struggle with living publicly," Casey said. "He had a fear about trading his life for fame and his work. He was worried that he was always mining his life for his work or that he couldn't have an unperturbed private life. He grew dependent on the feeling of an audience."

Even for a born confessional raconteur like Gray, that line between the public and the private must have been hard to walk. And though most blame the performer's suicide in 2004 on the lingering psychological and physiological effects of a car accident he had been in three years earlier, it's not hard to imagine that his deep-seated need to make his private life the subject and fuel of his public performances left him with nothing for himself. A romantic might even say Gray sacrificed himself for a greater purpose, that he was the truest kind of artist – the kind for whom there was no life outside of what he created with it.

The Journals of Spalding Gray 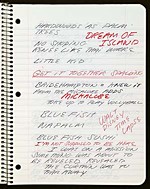