Tina Turner as the Acid Queen in Tommy

It's fitting that the Austin Film Society kicks off this particular Essential Cinema series in October, that most baroque and resolutely pagan of months. It is the season of the dead, of course, but also of masks, magic, and a wondrous theatricality that is ecstatically echoed.

Ken Russell's ongoing l'amour fou affair with the altered states engendered by music and musicians reached some sort of malevolently druggy high-water mark with Tommy, his visually stunning film adaptation of the Who's explosive 1969 rock opera. Responding with a typically lurid, loud riposte to the film's central questions – "Tommy, can you hear me? Tommy can you see me?" – Russell assembled the most outlandish and histrionic cast of his career to embody, in extremis, the words and music of the Who and Pete Townshend. Chief among them is an unhinged Oliver Reed (late of Russell's much-banned The Devils) as the pinball-wizard-to-be's deliciously sadistic tormentor Uncle Frank and an unforgettable Tina Turner as the Acid Queen. Viewed as either a mordant mediation on gods and monsters or a flashback to less simple times, Tommy retains every smidgen of the wild, transgressive power it had when it debuted.

Considerably more restrained, which, by Russell's standards, translates to "pretty much unrestrained," The Music Lovers is a hot fuss of classical bad behavior and thunderous cannonades of music and melodrama. Another one of the director's amazing, immersive period pieces, Richard Chamberlain is cast as Pyotr Ilych Tchaikovsky. Here he's less the historical composer and more a vehicle for some of Russell's ongoing themes, notably the ménage à trois that perpetually exists between art, love, and death.

Nearly all of Peter Greenaway's films have about them a certain metronomic stateliness and artfully dodgy black humor, but only The Cook, the Thief, His Wife, and Her Lover made any serious inroads in American theatres. The title sums things up deliciously – although it's not really possible to sum up either Michael Gambon (the Thief) or Helen Mirren (His Wife) – and the end result is a dish, like vichyssoise and revenge, best served cold. Michael Nyman's hypnotic score and a soupçon of Salò-esque perversions add a piquant flavor to the florid horrors onscreen.

Shakespeare proved an unnatural, albeit entertainingly bizarre, fit for Greenaway, who refashioned the Bard's Tempest into Prospero's Books. Adding elements that Shakespeare foreswore, such as copious nudity, animated sequences, and Sir John Gielgud as the sorcerer of dreams and nightmares, Greenaway creates an eye-candy riot that's difficult to swallow but impossible not to be enchanted by.

AFS ends its foray on a high note with two and a half by Derek Jarman. His Caravaggio depicts the 17th century artist (played by Nigel Terry) in a style that evokes the painter's palette and queer sensibilities that, unsurprisingly, mirror the filmmaker's own. Wittgenstein, Jarman's fantastically colorful and stagey (but never stage-bound) pseudo-biography of the 20th century Viennese philosopher, gets maximum emotive power from minimalist sets, props, and music. (Wittgenstein will be screened with Jarman's 60-minute autobiographical doc Glitterbug.) Jarman's muse, Tilda Swinton, anchors the sublime weirdness with imperious beauty. This is, to the best of our knowledge, the only biopic about a famed philosopher to also feature a neon-green Martian. Hey, if it ain't baroque, don't fix it. 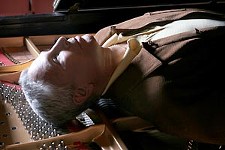 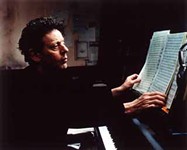