Did two Austin Web designers tap into our unconscious desire to replicate stock photos? Nah – they're just having a laugh.

What's the cultural currency of a meme these days? Is the next Nyan Cat or Sad Keanu more likely to go the way of the pet rock – a transient fad that offered little in the way of long-term fascination – or evolve into a new division of cultural studies departments across the land?

Indicators are good that Stocking Is the New Planking (www.stockingisthenewplanking.com), a Tumblr that sprang from the creative minds of local designer-researchers Jamie Graham and Dennis Van Huffel approximately a month ago, is an especially promising candidate for the latter. There's some kind of zeitgeist-mining at work, at any rate; upon going live, the site's profile took off ridiculously quickly. "It was put up on August 18. And on August 19, a friend sent me a link to an article in Gizmodo," Van Huffel says via conference call with the two creators, who work for projekt202, an Austin-based Internet design company that just merged with Dallas-based firm Captura. "We went straight to the head of the line in terms of substantial press coverage. Even in the age we live in, with how fast things move around, it still was a surprise." Coverage on everything from Huffington Post to the Late Night With Jimmy Fallon blog soon followed.

Unlike planking (lying stiffly like a plank on something), owling (perching like an owl on something), horsemaning (posing in a way that makes you look beheaded), and other recently invented/revisited variations of flagpole-sitting that have swept the Internet of late – physical stunts that are documented and shared – stocking involves re-creating images of other images. Participants (shall we call them "stockers"?) pose and shoot new versions of stock photos, those theoretically generic images of people, places, and things that populate brochures, advertisements, and websites everywhere.

Re-creating photos, or even paintings, is nothing new in the art world – see everything from 18th century tableaux vivants to Irina Werning's gone-viral retakes of people's childhood photos – but Stocking Is the New Planking revels in cheap forms of reproduction, which makes participation accessible: Many of the photos were taken with iPhones or similarly inexpensive equipment, says Graham. Then there is the delightful, fascinating artlessness of most stock images. "I think our favorites are the business shots that are really contrived," said Graham, "where you've got people pointing at a blank presentation and someone faking interest and people blurred in the background. That's not how things appear in real life."

Van Huffel continues the thought: "Stock photos in and of themselves, with no context or editorial attached, are a little creepy."

The inherent weirdness of such images – a man reading on a toilet, a woman with a drill and a come-hither look – is well-served and amplified by the painstaking yet irreverent efforts of contributors. "There's just something in each photo that kind of gives it a hook," says Van Huffel. "That's what we explore – just the little details."

Needless to say, this image-on-image play prompts a lot of theorizing about representation and meaning from certain segments of the population. "There was a tweet that spun off of a guy who's a researcher from Oxford who said this is a gold mine of material to study gender and examine identity and that sort of thing," says Van Huffel. "Jamie and I both went to art school, so it's impossible for us not to think critically about what we're doing. But we never set out to take it that seriously.

"It's on the Web, and I don't know if it's a more ephemeral experience," he continues, "but context and environment do affect perception. If it were in a gallery, the people who saw it might apply more critical thinking to it or think about how it relates to the world around it. And other people just look at it and laugh, which is great." 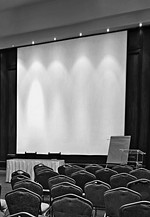