Giving the Sidekick a Spotlight

from behind the shadow of the Ninja Turtles comes 'Casey Jones' 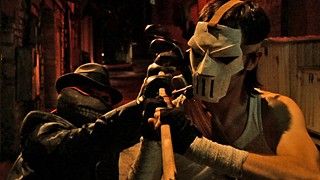 What do ninjas, vigilantes, and guerrilla filmmakers have in common? They do their best work when no one knows they are coming. That is how director Polaris Banks made "Casey Jones," his Austin-shot unofficial tribute to the Teenage Mutant Ninja Turtles. But rather than focusing on the heroes in a half shell, it centers on Jones, the turtles' mask-wearing, hockey stick-wielding human sidekick. Banks says, "He's a character that can be appreciated in an edgier sense."

Wait. The Teenage Mutant Ninja Turtles? Edgy? These are not the cutesy, catchphrase-slinging turtles of the CBS cartoon. These are the grim, gritty, bloodstained turtles of the original comics by Kevin Eastman and Peter Laird, the street-level heroes that kick-started the mid-Eighties black-and-white indie comic revolution. "They're ninjas, originally trained for vengeance," Banks says, and Jones was their badass running buddy. But just as Saturday morning cartoons morphed the turtles into soft-shell merchandising machines, Jones became a goofy love interest and a hapless helper. So for this origin story, Banks took him back to being a skull-cracking mad bastard with a golf bag full of weapons. Banks said, "He's like Batman, wherein he's just a guy, and that's what makes him so much more exciting."

"Casey Jones" debuted at the Marchesa Hall & Theatre on Aug. 14 and hit the Internet like a bo staff this weekend. Banks hopes it will enter the ranks of fan-made, fan-approved projects, like Star Trek: Phase II or the COPS/Star Wars mash-up "Troops," that get some industry buzz. However, the Internet is littered with trailers for unmade and unsanctioned projects; originally Banks planned to make a five-minute teaser. Instead, he sank $20,000 of unused college money into his 40-minute film. He says: "We just kept going with it. How hard was it to add another dialogue sequence here or establishing shot there?" Casting was simple. Banks says, "I've always just thought my brother [Hilarion] looked like Casey Jones." Most of the rest of the cast and crew were family, friends, roommates, or whoever was available over the five months of on-again, off-again shooting. As for the hordes of ninjas from the fiendish Foot Clan, "this is the movie that Craigslist made," he laughs. "If you ask for extras, you don't get that many people. If you ask for stuntmen, they get excited."

Even though he lives in Queens, N.Y., the back alleys of Downtown Austin and the industrial wastelands of Dallas fill in for Jones' crime-drenched streets of the Lower East Side. Banks credited Austin's laissez-faire attitude for making filming possible. "If you shoot somewhere else and you don't have any permits and you don't really know what's going to happen or how long you're going to shoot, they get a little irritated. But they were just up for whatever here." Generally, the shooting schedule was simple: Keep rolling until the cops show up. Banks said, "I wouldn't tell anybody what was really going on. Just pile a bunch of ninjas on top of a roof and say, 'Yeah, yeah, I've got permission.'"

The one place he could not afford to spare any expense was with the full-body costume for nunchaku-wielding turtle Michelangelo, designed and fabricated by his roommate, Oliver Luke. The suit "was pretty much the reason we made the movie," Banks says. Luke kept showing him his designs for other films, "but they were small. Little prosthetic feet here or a fake nose there. He had never got to do a full creature suit, and that's every special effects person's dream." Without access to a full injection-molding system, Banks and Luke pulled together pieces of silicone and latex in their apartment. "It took us over a year of failing over and over again to get it right," Banks says.

However, this is a film for fans by fans, and it was not enough to give Mikey his signature orange mask and addiction to pizza. Banks hired Robbie Rist, who voiced the turtle in all three live-action TMNT features, and the director hopes that mix of old-school fun and noir action will hit a chord with his fellow fans. He says, "It's cool to make the lightest, funnest turtle more badass."

"Casey Jones" will be available Sept. 17 at www.caseyjonesthemovie.com.