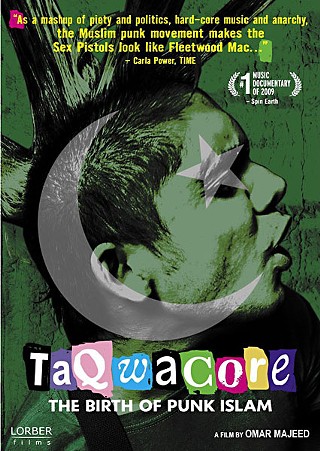 
Not many people can say they created a music movement out of thin air, but one of the few who can is Michael Muhammad Knight, a writer whose 2004 novel, The Taqwacores, introduced the world to Muslim punk before Muslim punk was a thing that actually existed. When Knight first sat down to write his book, he was looking for a way to reconcile his devotion to orthodox Islam with his love of snot-nosed American rock music, so he invented an imaginary Islamic punk rock scene in Buffalo, N.Y.; put the imaginary band the Taqwacores (a blend of the Arabic word for god consciousness, "taqwa," and hardcore punk) at its center; and let the two worlds collide: a true American story if ever there was one. Much to Knight's surprise, his book inspired hundreds of young Muslims to start their own real bands and turn Taqwacore into the battle cry of a movement.

Taqwacore: The Birth of Punk Islam, a documentary directed by Omar Majeed, follows a cross-country tour starring several of that movement's shining lights. (The film had its U.S. premiere at the 2010 South by Southwest Film Festival; see "Muhammad Was a Punk Rocker," March 12, 2010, for an interview with Majeed.) The bands featured on the tour included Pakistani-American provocateurs the Kominas (the Bastards); Vote Hezbollah, from San Antonio; and Secret Trial Five, an all-female Canadian punk band fronted by an openly lesbian drag king.

The great thing about the tour is that it was an equal-opportunity offender, scaring both small-minded Muslims and small-minded anti-Muslims alike. Take the moment when the bands perform at an open-mic night sponsored by the ultra-traditional Islamic Society of North America. There's a lot of hand-wringing by the event's organizers, and eventually the police shut the bands' amplifiers off, but not before several of the conservative young girls in head scarves in the audience have chanted "Stop the Hate!" with Sufi punk Omar Waqar. It's a revelatory and liberating moment for the Taqwacore musicians and their audience, whose religion seems to want to deem everything – including musical instruments and female vocalists – haraam, or forbidden. But the rebellion of Taqwacore is one of context and subject matter only. Say what you will about the middle-finger daring it takes to write songs like "Sharia Law in the USA" and "Suicide Bomb the Gap" in post-9/11 America, the music these bands make would have fit right in at a Sex Pistols show circa 1977. The great irony of punk music is that its conventions – the brazenly loud three chords, the screaming vocals, the leather jackets, the Mohawks, the anti-authoritarian sneers – have become ritualized to the point of orthodoxy: There is a right way to do things. So it's not entirely surprising when the members of the Kominas move to Pakistan to convince Pakistani youth to rebel against their culture by embracing the American punk-rock lifestyle. Not surprising but a little depressing: otherwise self-aware American Muslims trying to force punk rock – that most Western, most individualistic of art forms – down the throats of unresponsive Pakistanis in the name of saving Pakistanis. Change punk to democracy and Pakistan to Iraq, and you've got a movement even Dick Cheney can get behind. 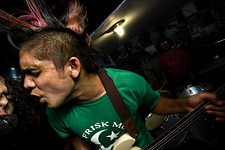