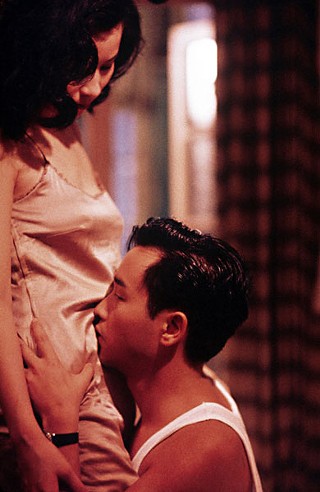 Days of Being Wild

The term "world cinema," a catchall for anything outside our own borders, seems especially apropos for the Hong Kong New Wave. Many of its filmmakers studied abroad – Tsui Hark, for one, attended the University of Texas in the Seventies – and they returned to Hong Kong, a nation whose sovereignty came with an expiration date, aflame with ideas and aesthetics absorbed from other film cultures. The French New Wave is the most obvious antecedent; it's where the HK New Wave took its name from, and the two movements shared an obsession with youth culture, as well as an experimental verve applied to narrative and camera technique. But those tyrant tykes of Sixties ciné weren't the only influences. Gangster films, film noir, American Westerns, martial arts pictures, and the Beijing Opera all made their marks on the firebrands of Hong Kong New Wave. The HK filmmakers studded their films with references to those ancestors, subverting the old to forge something new and very often sublime.

The HK New Wave began in the late Seventies, gained steam in the Eighties, and flowered anew with a second generation of filmmakers in the early Nineties. The Austin Film Society's latest Essential Cinema series kicks off with two films from one of those second generation HK filmmakers, Wong Kar-wai. Days of Being Wild was Wong's second film, following As Tears Go By, and his first outright masterpiece (there were at least four more to come). No coincidence: The film also marked his first collaboration with cinematographer Christopher Doyle, whose silky camera choreography and sensual color filters are an essential part of Wong's films' allure.

Much of the Sixties-set Days of Being Wild is colored like green linoleum – which is a lot sexier than you'd expect – but then, everything's sexy in Wong's film: rain, clock hands, heels clicking, a concessions stand, and, most especially, the baby-faced Leslie Cheung, a Cantonese pop star who would also star in Wong's Ashes of Time and Happy Together before his suicide in 2003. Cheung plays York, a layabout lothario obsessed with finding his birth mother. He takes up with Maggie Cheung's shopgirl Su Li-zhen (a character who resurfaced in In the Mood for Love and 2046) then cruelly discards her. When they meet again briefly, practically nose to nose, Doyle's camera crowds into the corner with them, almost like a third lover. This is cinema that buckles the knees.

The film's narrative splits away from the pair and rethreads itself in new but equally agitated permutations, a storytelling technique that's now canon in Wong's films. His 1995 film, Fallen Angels, has a similarly expanded focus, shifting between two storylines of youth gone way beyond being wild to borderline feral. One involves a mute teenager (played by heartthrob Takeshi Kaneshiro) who breaks into shops after hours and violently pushes goods and services nobody wants (against-the-will haircuts and ice cream force-fed by the gallon). The other storyline tracks a hired assassin (played by Leon Lai) and the woman who books his gigs (Michelle Reis). She also secretly, and obsessively, adores him, sneaking into his apartment and scrubbing down the surfaces while wearing mess-friendly vinyl and rubber minidresses.

Wong previously introduced the idea of a lovelorn cleaner in 1994's Chungking Express; Fallen Angels initially was conceived as the third act to Chungking Express' dazzling diptych. Both films are in large part about longing and lovelornness, but Fallen Angels wants nothing to do with Chungking's delicately rendered, deeply felt romanticism. Fallen Angels skips between frantic time-lapse and languorous slo-mo, which gives it the feel of being shot by either a cokehead or someone on an opium bender. Its giddily vulgar imagery, while ever gorgeous, is as bracing as a slap to the face. See Kaneshiro mount a dead pig at a butcher's shop and give it a deep-tissue massage, grinning like a fiend all the while; see Charlie Yeung slide up a wall like she's magnetized at the belt, her crotch a new center of gravity.

The series' midway mark, Ann Hui's Song of the Exile is comparatively sedate. A first-generation New Wave filmmaker, Hui started in television and moved into features in the late Seventies. She's tackled just about every genre under the sun, but the autobiographical Song of the Exile is a straightforward, quietly affecting family drama. Maggie Cheung stars as Hui's surrogate, Hueyin, a young woman educated in the UK. At the film's beginning, set in the Seventies, Hueyin reluctantly returns home to Hong Kong to take care of her widowed mother (played by Tan Lang Jachi Tian), who immigrated after the second Sino-Japanese War. Hueyin then accompanies her mother to her native Japan, and there – unable to speak the language, an odd duck in bell-bottomed jeans – she slowly awakens to the helplessness of cultural alienation that bedeviled her mother, the exile, for so many years.

Has any decade dated as poorly on film as the Eighties? The thickly shoulder-padded suits, the DayGlo color wheel, the wavy-sounding electronic score: They're all on display in John Woo's The Killer. Still, it's rightfully iconic and marks a tipping point in terms of international recognition of Woo's work. Alongside Tsui Hark (who produced), Woo redefined action film choreography; indeed, the influence of Hong Kong New Wave on modern action films is so pervasive that its hyper-violent, elegantly acrobatic style is now the norm in Hollywood pictures.

The Killer recasts the wuxia hero in Miami Vice threads, Christian iconography, and a Sirk-like melodrama in which the title's killer – played by eternal cool cat Chow Yun Fat – falls in love with a beautiful chanteuse who was accidentally blinded in his crossfire. It's moody and gloomy and one imagines the blood-squib budget rivaled that of craft services.

In contrast, Tsui Hark's Peking Opera Blues is a gleefully manic, color-burst spectacle of action and comedy. Set in Beijing at the beginning of the 20th century, it follows – breathlessly, just barely keeping up – three women: a revolutionary (Brigitte Lin), a singer trying to steal crown jewels (Cherie Chung), and a hopeful actress (Sally Yeh) prevented from joining her father's Peking Opera because of the edict that only allowed men to perform onstage. The film opens its arms and sweeps in influences and elements from far and wide, romping between screwball and martial arts, palace intrigue and theatrical pageantry. It's a wild ride.

All screenings take place Tuesdays at 7pm at the Alamo Lamar (1120 S. Lamar), except The Killer, which is at the Alamo Ritz (320 E. Sixth). See www.austinfilm.org for ticket info.