'Scarface' blasts its way back to the big screen 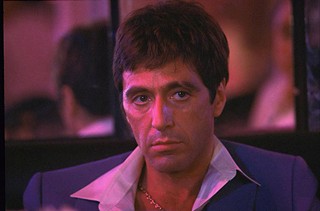 And it's not just Al Pacino's take-prisoners-but-torture-them-before-you-snuff-'em performance that makes Scarface so endlessly, effortlessly watchable. It was then-fledgling director (The Hand) and writer Oliver Stone's seething, subtext-bloated screenplay that put the words in Tony Montana's mouth. "Say hello to my little friend" wasn't just a firepower boast; in Stone's testosterone-engorged script, it's all about the power of the bang – sexual, phallic, conniving, and, ultimately, utterly tragic. Death becomes Tony Montana – before Tony Montana becomes death, that is. Scarface, for better or for worse, is as much a part of one generation's pop-culture landscape as Star Wars has become for another's. Fuck the force. Tony Montana (the bad guy, remember?) has his little friend, his mountains of blow, black-hearted immigrant striving, and Michelle Pfeiffer. Countless references to everything from hip-hop (Scarface, ad nauseam) to punk (Blink-182 took its name from the number of times Al Pacino sneers the word "fuck") to parodies galore (YouTube it: There's gotta be at least a thousand of 'em), De Palma's film is the glossy grindhouse flick that Just. Won't. Die.

Tony fucking Montana, immigrant outlaw and evil motherfucker trapped in a world entirely of his own creation, both onscreen and off. Turns out the fucking world is his after all. WTF?