Tweet
print
write a letter
America's gotten fat, for sure, and the overconsumption compulsion extends to pop culture, too. We're all gorging on the same reality TV train wrecks and Eighties nostalgia, tweet-twerpy hip-hop magnates and pro athletes on a first-name basis with the fuzz. But we're not doing much with that information overload, save reposting it all to Facebook. Most of us, at least. The occasional few – the supercreatives – do something special, and in these pages we've profiled a handful of Austinites who take pop culture and spin it into pop art. – Kimberley Jones

The first thing you need to know about Summer Anne Burton's artwork is there's not an ounce of insincerity to it. Sure, a portrait of LeBron James rendered with glitter and in the manner of a junior high school girl's doodle or a painting of Jersey Shore's Snooki riding a sea horse may sound like a joke, but, Burton says, "I really like Snooki." And she really means it.

For now, she's put aside the portraits of pop-culture icons with complicated relationships with their publics to devote herself exclusively to a passion project called Every Hall of Famer, wherein Burton hand-draws the likenesses of every baseball player or personality ever inducted into the National Baseball Hall of Fame. She posts every new portrait to her blog (www.everyhalloffamer.com), which has garnered national attention from the likes of ESPN magazine.

A casual baseball fan as a child, Burton re-awoke to the game in her mid-20s: inhaling books on baseball stats, playing softball for BookPeople's team in the burgeoning Alternative Softball League, joining a fantasy baseball team, watching Ken Burns' documentary on the history of baseball (an experience she calls "totally game-changing"), and making the pilgrimage to the National Baseball Hall of Fame in Cooperstown, N.Y.

It was a perfect storm of inspiration. In January, Burton began chronicling the nation's baseball greats in order of their induction and embellishing the pictures with statistics and quotes, hand-written in her endearingly less-than-pristine penmanship. Her favorites, she says, are often the ball players largely lost to the dustbin of history, whose backstories read like the stuff of a dime-store novel. "There's a guy who I'd never heard of before called Ed Delahanty who was a raging alcoholic – pretty much half of these guys were alcoholics – but this guy ended up dying because he wielded a knife on a train and was kicked off and then he fell off a bridge, like in the middle of his baseball career. Unbelievable stuff."

And for all the public perception about the "good old days," Burton's research has proved to her that the desire to cheat the system has always been in place, from spitballs to steroids. "Pretty much in any era, you have some kind of shady behavior going on. People are always trying to cheat to get ahead. It's pretty much universal in the world of baseball – and life, I think," she laughs.

But what hasn't changed –or rather, has only deepened for her –is an in-the-bones love of the game.

"I just read this really good article. Bill Simmons, who writes for ESPN, has this site called Grantland that some other writers like Chuck Klosterman are writing for. And this guy wrote an article about growing up watching baseball and thinking of it as this pure thing and then sort of becoming more cynical about it as he grew older.

"And I'm doing the opposite. I've been cynical about so many things in my life, and baseball is actually something I feel completely uncynical about. And that's what I want to devote some time to right now." – K.J.

Some of us have a tendency to overthink things. We might ask, for example, what moved local designer Fay Helen to start creating original, boldly graphic likenesses of Seventies-era celebrities and adorning objects with them? What is it about her choice of icons – Tom Selleck, say, or Woody Allen or Divine – rendered in modern lines and fetching color combinations on dainty pillows and dish towels that makes us laugh out loud? What makes them so much wittier than your garden-variety, mass-produced, faux-vintage A-Team tee? What does it all mean?

It could be that the fun lies in the contrast between the careful, artful way in which Helen constructs images of a culture we've come to think of as transient, disposable, or to be appreciated only ironically. But, yeah, mostly we're overthinking it.

"With me, honestly, I'm just a simple girl," says Helen. "If it makes me smile or laugh, I'm all over it. I just see it, and I think: 'Oh, that's hilarious. I have to do something with that.'"

Anne Hanrahan, who recycles leather thrift-store clothing for her takes on the celebrity face – and who, like Helen, sells her creations exclusively at Moxie (with Solid Gold, 1601 E. Fifth) – counts irritation as an excellent motivator: "A few years ago, I got annoyed at some little shop around here, some hipster shop selling wacky crafts," she says. "There was a toilet-seat cover, a shag kind, and someone, this craft person, had just taken a piece of fabric that had cowgirls printed on it, cut one out, slapped it on this toilet seat cover, zigzagged around it, and was charging like 50 bucks for it. I thought I could do better than that."

Like Helen's heat transfers, Hanrahan's leather cutouts of Nico, Siouxsie Sioux, Felix the Cat, Alfred E. Neuman, and the like on handbags, vintage jackets, and pillows are as much about the impact of an image than what it represents.

"There are certain faces that you fall in love with," she says. "What's cool about them is the way that, even though the images have been whittled down to absolutely their bare basics, you can still instantly recognize who it is. Sometimes when I'm working on a face, while I'm putting it together and cutting out these strange little shapes, I'm thinking, 'This isn't going to work; this doesn't look a thing like Johnny Cash!' Then you get it all put together, and it's like, whoa, there he is." – Cindy Widner 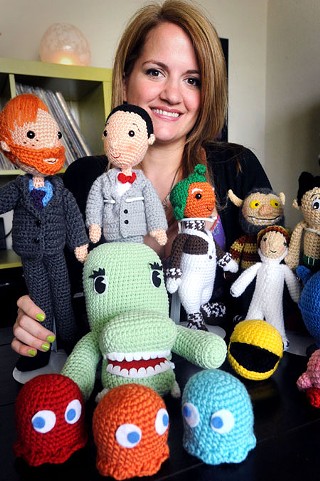 A Hell of a Yarn: Allison Hoffman's Crafty Is Cool

It might have all ended with the one crummy scarf.

"I tried knitting," says Allison Hoffman. "I made a scarf, and it took a long time, and I didn't really like it. So I was like, okay, good, I know how to knit. Whatever."

Hoffman began crocheting dolls for her three young sons, creating her own patterns inspired by characters from their favorite TV shows. She didn't have any formal art training, but, she says, "I've always been kind of crafty. ... It's a lot of math –knowing how many stitches and how many rounds is going to make a shape. It's almost like sculpture."

On a whim, she made a Conan O'Brien amigurumi, right around the time the Team Coco train was gathering steam. She posted a picture to the "I'm With Coco" Facebook fan page, and the feedback was overwhelming. Perez Hilton blogged about it, and O'Brien's brother commissioned a doll to give to his niece, Conan's daughter.

Then last summer, Hoffman's homemade Pee-wee Herman doll netted the same kind of rabid reaction online – Paul Reubens even tweeted about his knit doppelgänger. When Reubens came to town for South by Southwest in March, Hoffman and her husband were invited to an appearance he made at Esther's Follies.

"We sat in the front row, and I waved around this Pee-wee doll, and Pee-wee asked me to come up onstage, and I handed it to him. ... It's just kind of surreal, you know? Pee-wee Herman? He's an icon."

Hoffman now runs a profitable online business called Crafty Is Cool (www.craftyiscool.blogspot.com), where she sells her homemade patterns and takes commissions, but she's also expanding her focus to art, not just craft. She'll have two pieces debut this summer at Iam8bit, an L.A. gallery show devoted to retro video gaming; one piece riffs on The Legend of Zelda, and the other features arcade king Billy Mitchell (profiled in the 2007 doc The King of Kong: A Fistful of Quarters), whom Hoffman has sprawled on a bearskin rug, "but it's a Donkey Kong skin rug." And then in August, she'll contribute a piece to a Star Wars-themed exhibit in Florida called "Stitch Wars Strikes Back."

It's all a continuation of what Hoffman's already been doing in her pop-culture-inspired pieces, but the change of venue makes all the difference. "It's gratifying to be able to say that your little craft with yarn is worth being in a gallery." – K.J. 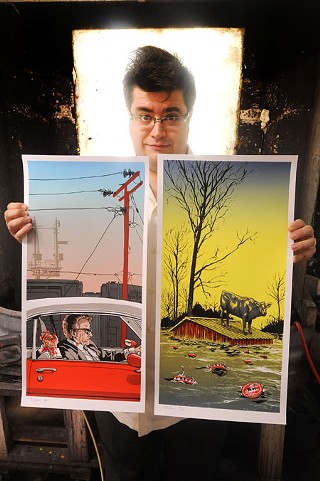 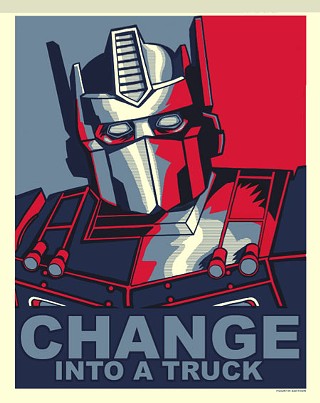 Change Into a Truck by Tim Doyle

And then there's Tim Doyle of Nakatomi Inc (www.nakatomiinc.com), harvesting the filmic fields of pop culture from the 1990s and earlier, bringing his impressive draftsmanship and graphic design skills to unleash limited-edition screen prints based on movies like The Big Lebowski, Rushmore, Apocalypse Now, Die Hard, Full Metal Jacket, and more. Doyle, the man who started the Alamo Drafthouse's Mondo Tees on the road to greatness before ditching it to work for himself, not only creates most of the posters, but also oversees Nakatomi's growing cadre of renowned artists – Paul Pope, Clint Wilson, Jacob Borshard, et al. – working last-century nostalgia and modern thrills into paper-based visuals for enhancing the glory of your crib's walls.

"The pop-culture silkscreen art game?" says Doyle, looking up from his drawing board. "It's like I helped build that niche through my work over at Mondo. We built this whole collectors' community. There was a community that was already into buying rock posters, and we took those same artists and had them doing movie posters, and the appeal was so much wider. Because people were like, 'Oh, that's a brilliant poster – but it's for Phish.' Whereas everybody likes John Carpenter's The Thing, so if you can get Tyler Stout, who's a really good artist, to do his take on The Thing, that's a home run." Doyle has local selling spots in Austin Books & Comics and Parts & Labor, and he usually represents at the Blue Genie Art Bazaar and the Renegade Craft Fair, but these days much of Nakatomi's action extends beyond Austin – and even beyond Texas.

"I was one of the first people Ken Harman of Spoke Art contacted about the 'Bad Dads' Wes Anderson art show in the middle of 2010," says Doyle. "We talked for a while, and now I've got my own prints up there in New York, and they did very well for him. So when the 'Quentin vs. Coens' thing came around, posters for Tarantino and Coen brothers movies, I did seven prints for the East Coast opening, and I'm gonna do another two or three new prints for the West Coast opening.

"And there's this movie theatre in Australia, the Astor Theatre," says Doyle. "Tommygood.com is the website this guy built to sell posters for the theatre – and he contacted me. Now we have a great relationship, I've done some prints for him, and a lot of people in Australia really like my stuff. It's weird." – Wayne Alan Brenner