Anatomy of a Scene

New York and No Wave in 'Blank City' 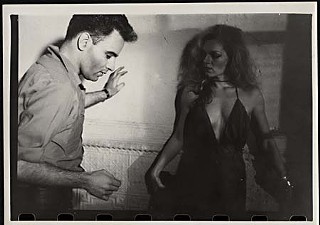 "I feel like our lives were movies," says Deborah Harry at the beginning of Blank City, first-time director Céline Danhier's doc about filmmaking in the playground/battlefield of New York's Lower East Side circa 1977-1987. "We were very cinematic."

She means it literally. The frenetically creative artists and weirdos who funneled down to an especially bombed-out sector of the legendarily bankrupt city in the late Seventies and early Eighties did, in fact, film their lives – albeit primarily (and luckily for us) in the form of narrative features rather than verité. Put another way, says artist James Nares, who broke into buildings and made togas out of bedsheets to direct campy costume drama Rome '78, "The movies were all somehow about New York, even if they were about ancient Rome."

There's nothing structurally radical about Danhier's documentary, but, due to the abundance of extant footage – and, crucially, the willful poverty and insularity that meant the films had to be cast from the same small pool of musician-actor-director-artists who had populated that time and place – it seems imbued with the energy and essence of a scene. For every talking head, there are seemingly miles of evocative archival footage, edited at the pace of the speedy times it depicts.

Thus, we have the pleasure of hearing fresh anecdotes and well-spoken postulation from familiar crossover figures (Harry, Jim Jarmusch, Steve Buscemi, Susan Seidelman) and still-fringy legends of the avant-garde (Eric Mitchell, Amos Poe, Vivienne Dick, Lizzie Borden) while being captivated by the imagery they created. Danhier dips in around 1977 and glosses the quick NYC punk era and revisits, via Fab Five Freddy and Wild Style director Charlie Ahearn, the uptown-downtown hip-hop collusion in the early Eighties, but her main focus here is the No Wave and Cinema of Transgression movements that fell in and around those higher-profile moments.

Blank City attributes the "No Wave" moniker to Village Voice (also a vital force at the time) film critic J. Hoberman; so-labeled filmmakers (Poe, Mitchell, Jarmusch, Nares, Scott B and Beth B) had fallen under the influence of Robert Bresson, Jean-Luc Godard, Michelangelo Antonioni, and John Cassavetes, as well as the more purely experimental Andy Warhol, and they made narrative features with art-film techniques (and budgets). In the hinterlands, where it was even harder to get underground films than cassette tapes, No Wave was received primarily as a musical movement, associated with challenging dissonance and frequent saxophone deployment – including such nutters as Bush Tetras, James Chance, DNA, and Lydia Lunch's Teenage Jesus & the Jerks. Cinema of Transgression, not so much a proper movement as a coda, made the most of the fuzzy media boundaries of No Wave: More confrontational, violent, and sexual than its predecessor, it is identified largely with musician/performer Lunch (at times in the company of Sonic Youth) and her collaborators, filmmaker Richard Kern (Fingered) and director/provocateur Nick Zedd (They Eat Scum), who wrote the movement's manifesto.

Enter AIDS, MTV, gentrification, the fame and money that befell Jean-Michel Basquiat – some variation of the usual suspects. At 10 years or so, the downtown scene didn't exactly die young, as scenes go, but it did live fast and, as Nares notes, it was unrelentingly "passionate. [Some of the films] may have been badly made, but it had a kind of integrity." Watching it fly by in Blank City calls up that excited buzz, as well as some nostalgia, even if for a time and place you never were.

Blank City screens at the Alamo Drafthouse at the Ritz this week. See Film Listings for showtimes.