Restoration or remake? The famous mural on the old Varsity Theater on the Drag is being altered forever. The building is being remodeled inside and out for new restaurant tenants (see "Historic Varsity Theater Mural Mutilated," May 20), and project architect Michael Antenora said that, rather than renovating the mural, he intends to create "a reasonable facsimile" of local artist Carlos Lowry's original work.

To make way for new ground-level windows, the mural's core component – the 11 film frames representing scenes from classic movies including Breathless and Giant – will be re-created farther up the wall. "We definitely have plans to keep those and restore them and put them back into good condition when the project's done," said Antenora. There will also be a new 12th frame. Antenora said University of Texas students will propose what film goes in there "so they can pick a classic that's more contemporary to them." The full-body portraits of film stars, including the massive but badly peeling image of Jimmy Cliff in The Harder They Come, will get a fresh coat of paint. The eastern entrance also gets a restoration, with a re-creation of the original Varsity Theater sign. And in a nod to the building's time as a Tower Records, the stencil portraits of iconic rock musicians including the Clash and Janis Joplin will be restored by their original artist, Federico Archuleta. However, several familiar images – including the band of clowns performing in front of the old theatre, the silhouettes of camera crews, and the smaller portraits of Greta Garbo and Humphrey Bogart – will simply be painted over.

This is not the first time that the mural has been altered since it was painted in 1979. Lowry himself repainted some sections over the years, including a major restoration in the late Eighties. After the Chronicle provided Antenora with Lowry's contact details, he talked to the artist, who unfortunately is too ill to take part in the repainting. While Lowry would rather the work stayed as is, Antenora said, "[He] is not opposed to what we have proposed" and has offered copies of the original artwork to be used by the restoration team when they start work in July. 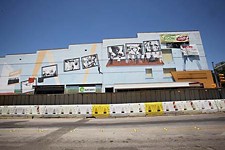