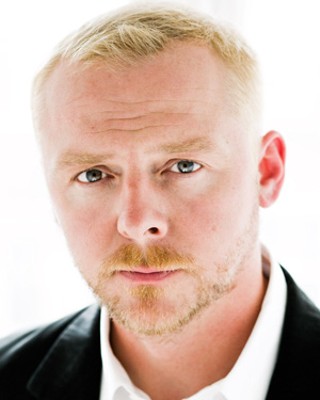 Entertainingly alternating, as it does, between being a trenchant memoir on the sometimes comic (and often not) vicissitudes of growing up in the UK in the Eighties and Nineties and being a Courier-font meta-sci-fi tale of "Pegg" and his robosexual manservant Canterbury, Simon Pegg's Nerd Do Well: A Small Boy's Journey To Becoming a Big Kid is clearly not your average autobiography. Oh, sure, it recounts the ongoing trek to comic superstardom (or a reasonable facsimile thereof) of one of the creative forces behind and in front of Spaced, Shaun of the Dead, Hot Fuzz, and, most recently, Paul. But it's more interesting – and possibly more British-y when compared with most Yank celeb nob-yankers – by dint of how smart a read it is.

Overflowing with alarmingly bang-on analyses of geek/nerd iconography from the Enterprise to the Death Star to Comic-Con, the Pegg's Tale, so to speak, is the kind of personal history you wish all your four-color heroes would write but generally don't. Also, reading it on public transportation leaves you wide open to unforeseeable guffaws that, in turn, leave you looking completely mental. On public transportation. Be forewarned.

The Austin Chronicle spoke to Pegg on the eve of his stateside book tour, which touches down at BookPeople on June 15, and uncovered, among other choice items, his early fear of horror films and why any film (but one) with a title like _____ Movie is shite and to be avoided. At a time when fellow comic Patton Oswalt has declared geekdom dead due to hellacious pop-cultural overexposure, Pegg is still intensely game to go where no nerd has gone before. Read it and weep; read it and rejoice; just whatever you do, don't "skip to the end."

Simon Pegg: I did, yeah.

SP: I think he's kind of got a point. Basically, what's happened is that what used to be a sort of niche part of culture has now become the mainstream. It's been hegemonized, if I can use that word, by the mainstream and diluted to an extent as well. I think it all boils down to infantilism, people wanting to stay in a state of regressive childhood and that mentality. And that's the reason why the vast majority of cinematic output is superheroes and spaceships and stuff like that. It's all children's stuff, and that's because none of us want to grow up, you know? The world grows up and realizes that if it's just us, as far as we know, in this giant universe, then we need to be comforted, and so we look to childish things. It's become so much that way that everyone's into it now. As for us [older geeks/nerds], it's become as if they were fans of a band that has started to become suddenly very famous. Geeks, real geeks, are pissed off because, you know, now everybody's in on the game.

AC: Geekdom is no longer the purview of those social misfits and/or brilliant forward-thinkers with enough free time and due diligence to wait out and track down Tom Baker-era Doctor Who episodes on their local PBS affiliate or original copies of EC Comics. That sort of "diggers" effort is no longer required to establish geek cred.

SP: Yeah, and I think that Comic-Con is a great example of how geek culture has been hijacked, basically, by corporate thinking. Comic-Con used to be exactly that: a small comic convention in San Diego. Now it's a massive film festival, and even the films that have a presence there aren't necessarily even related to the spirit of the event, you know? It's not just science fiction, fantasy, or comic book adaptations. Now you've also got comedies and just a lot of stuff that's just, I don't know, not what Comic-Con used to be all about. I remember seeing Pineapple Express and Hamlet 2 there, films which might, perhaps, have some crossover appeal for people of a certain age but certainly aren't anything to do with comic book culture as a whole. 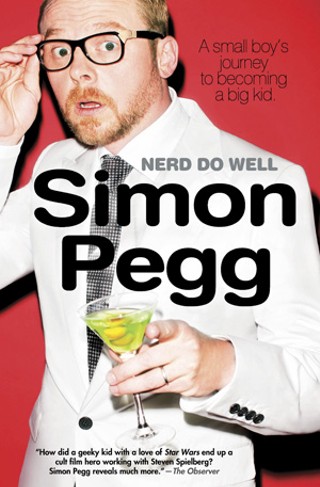 Interestingly, Star Wars initially had a presence at Comic-Con. Lucas was one of the first filmmakers to actually use Comic-Con as a way of generating a ground buzz on the film as a science-fiction film, which was very cunning, considering what Star Wars has become and what Comic-Con has become. I still love Comic-Con, and that's not a criticism of Comic-Con. That's just my own issue. Maybe.

AC: In Nerd Do Well, quoting from one of your university papers titled "Base and Supersucker: A Marxist Overview of Consent in Star Wars and Related Works," you make a very cogent argument on the possibly negative effects of pop culture on "the masses." You're a father now, so what can Tony Stark and Reed Richards teach young people beyond the joys of kicking ass, saving the world, and enjoying awesome superpowers?

SP: Good question. I think that's something that in my work with Edgar Wright and Nick Frost that we've always tried to do: challenge people. I think you should be challenged when you go to the cinema; it shouldn't just be about watching a firework display. Instead of it just being passive entertainment, you should actually have some work to do. The trouble is that that's not an attractive proposition for people, to have to go and do some work while they're at the theatre. You have to kind of disguise it.

I think that education has to be the root of all our successes and failures. Children have to be turned into functioning, good, smart adults. The world would be a better place if we all were a lot cleverer, and we're not particularly going in that direction. It is kind of worrying, because as entertainment has become more corporate, more widespread, with more television networks and more film companies, everyone's vying for the dollar. It's like everyone is tending to pander toward our unleashed popular culture. It's just the path of least resistance. It's like those people who go see those films that are called (Something) Movie? You know, those dreadfully unfunny pieces of shit?

SP: Right. The fact that those movies make money just goes to show how undemanding we've become as a cinemagoing audience. It kind of frightens me. A lot.

AC: Probably the only exception to that would be Mel Brooks' Silent Movie.

SP: Silent Movie is a fantastic film. And Mel Brooks is a really interesting example of a guy who did spoof films, and his best work are spoofs of the films that he loved. He loved Westerns; he loved Universal horror films; he loved Hitchcock movies. High Anxiety and Young Frankenstein are two of the best comedy films ever made. When he did something he didn't like – like Star Wars – it was terrible.

AC: You'll probably go to your grave and come back from it being best associated with Shaun of the Dead, but in Nerd Do Well, you cop to the fact that you didn't even see a zombie film, Romero's Day of the Dead, until 1985, and actually saw Tom Savini's 1990 remake of Night of the Living Dead before you saw Romero's original.

SP: I will admit to having a slight fear of horror in the early Eighties, right before my teens, because it was the age of VHS and, initially, there were no sort of laws of censorship when it came to the UK. All the video shops were just filled with these sort of unrated, dodgy horror films that looked completely terrifying on the boxes if you were a 12-year-old boy. When I was 11, my friend got a copy of The Texas Chainsaw Massacre, and I didn't watch it because I was frightened that it would make me mental. And then one day my friend [rented] An American Werewolf in London, and I girded my loins and watched it. And I absolutely loved it, because, yes, it was kind of frightening, but it was also funny and smart and brilliant. It showed me that I could watch a film that had extreme violence and not only would I not be mentally disturbed by it; I would be mentally inspired by it. That was a defining moment for me. Obviously.

Simon Pegg will be at BookPeople on Wednesday, June 15, at 7pm. Space is limited; see www.bookpeople.com for details regarding booksignings.