AFF on the tips of our tongues, Gallagher's indieWIRE shout-out, local premeires in L.A. fest, and more

We had planned on opening this column with the announcement of the recipient of the Austin Film Festival's 2011 Extraordinary Contribution to Filmmaking Award, but the i-dotting and t-crossing is taking its sweet time. Let's just say we think the name, when it's announced, will get movie fans' collective motor running. In the meantime, there's other news from AFF HQ – namely that after 10 years of involvement, seven as the festival's film program director, the very savvy and dry-witted Kelly Williams is moving on. Well, not entirely: He'll be hanging around long enough to assist new Film Program Director Stephen Jannise with programming the Austin Screens and Comedy Vanguard sections of the festival, but Williams' intent is to focus on producing, including "Hellion," the new short by Kat Candler, which shoots next month (see www.indiegogo.com/hellion for info and how to contribute). "Hellion" will co-star Jonny Mars (The Happy Poet), which handily bridges into our next item... Austin filmmaker Sean Gallagher got a spot of love from indieWIRE recently in its in-production column "5 Projects To Root For." His long-gestating project Good Night, co-starring and produced by Mars, is currently seeking funds to cover postproduction costs (www.kickstarter.com/profile/goodnight)... If you're noticing a trend, it's that skimming Kickstarter or IndieGoGo or any other site that enables people to contribute funds electronically to a creative project is an excellent way to keep tabs on what's happening in the Austin film scene. Without breaking a sweat, we can think of two more projects currently soliciting funds – Alex Smith's Winter in the Blood (his first feature since 2002's The Slaughter Rule) over at Kickstarter and Elizabeth Spear's Roundball at IndieGoGo – and we anticipate a dozen angry emails from all the filmmakers we haven't mentioned. (We're not mind readers, you know.) Our point? Open your pockets, people. This is how movies are getting made these days... You know who's making a lot of movies these days? John Merriman. The Austin writer and performer, who appears in the aforementioned Roundball, has two films premiering in the Narrative Competition at the Los Angeles Film Festival, which runs June 16-26: An Ordinary Family, director Mike Akel's follow-up to Chalk, and You Hurt My Feelings from former Austinite Steve Collins (who won the same fest's Target Filmmaker Award in 2006 with the locally shot Gretchen). Richard Linklater's true-crime dramedy Bernie, starring Jack Black and Shirley MacLaine, will open the L.A. Film Festival on Thursday, June 16... Finally, you may have missed the debut of locally produced doc Sushi: The Global Catch at the Seattle International Film Festival on June 8, but you can purchase the original soundtrack by Austin composer and Austin Chronicle "Best of Austin" award-winner Brian Satterwhite on iTunes and Amazon.com. Admit it. You want to know what sushi sounds like. 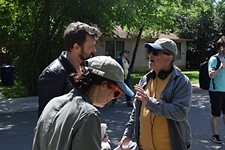