As one of the pivotal auteurs behind the mumblecore movement (just please don't call it mumblecore), New York-based Joe Swanberg's fortunes have seemingly crested and sunk and then crested yet again as m'core flounders in and out of subcultural style.

Probably no one's taken more critical and indie forum/board heat than Swanberg, a director who eschews the term "auteur" but whose films nevertheless have an unmistakable lo-fi, semierotic, disturbo-charm to them. From 2005's Kissing on the Mouth to 2009's Noah Baumbach-produced Alexander the Last – which led the prolific director into a two-year creative lull – Swanberg's films have basked in the intimacy provided by small-scale, low-cost digital productions cast-and-crewed with friends and exes. Call it sexistentialism, call it mumbleporn, call it the long arm of John Cassavetes, just don't blame Swanberg for his copious – with its occasional scenes of copulating hipsters – creativity.

The Austin Chronicle spoke to Swanberg on the eve of an Austin showing of his 2011 films – Uncle Kent, Silver Bullets, and Art History – and discussed his recent return to form and the frequent criticisms leveled against his films.

Austin Chronicle: So the three films you're going to be screening at the Alamo Drafthouse were all made in the past year? That's some mad productivity.

Joe Swanberg: You know what? Here's the scary part: These are three of seven that I made last year, and the other ones just haven't shown anywhere yet. May through September of last year was a totally insane, productive time.

AC: You've averaged about two movies a year since 2005's Kissing on the Mouth, so you're hardly a slacker, so to speak.

JS: Well, what happened was that in February we found out that my wife was pregnant and I thought, "Well, shit, I had better start making some movies, because once this baby is born I'm not going to able to work as much as I want to." Initially my idea was to shoot a bunch of stuff and then edit it once the baby was born, but as it turned out, I actually finished a bunch of them.

AC: Silver Bullets is unlike anything you've attempted before. It's pretty ambitious stuff. 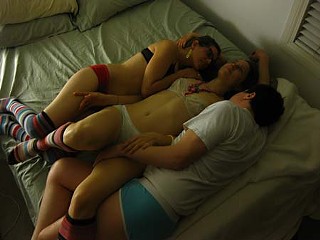 JS: I'd been working on that one for a really long time. I started in November of 2008, and that was the only film I was working on for two years. There was a point when I became really frustrated that I hadn't finished it yet, so I went to Los Angeles and very quickly made Uncle Kent. That was May of last year. And I finished that so fast that I went right into making Art History, and then I finished up Silver Bullets while I was making several of the other films.

AC: Silver Bullets is a movie about a filmmaker in complete distress, a filmmaker who appears to have completely lost his love for filmmaking. How autobiographical is it?

JS: At the time that I was making it, it was 100 percent autobiographical. I was totally bummed out on movies when I was making that film. I was at a low point, creatively, in my life, just right across the board. I felt, you know, that if I didn't like movies anymore and movies were my life, then what was I going to do? So all of that stuff is in Silver Bullets. It's funny for me to watch it now because I had a turnaround on that, and a lot of that has to do with making Uncle Kent and Art History. Making those movies revitalized that spark that I had that made me love making movies so much in the first place. So I slaved away for two years on Silver Bullets and then quickly went and made Uncle Kent and Art History, which allowed me to eventually finish Silver Bullets.

AC: Horror filmmakers Ti West (House of the Devil) and Larry Fessenden (The Last Winter) are both in Silver Bullets. Had you known them beforehand?

JS: I actually met Ti in Austin in 2005. We both had our first movies screening there, and we sort of became buddies. He happened to be in New York making House of the Devil when I began making Silver Bullets, so I kind of roped him into acting in the film. Once he was involved, he brought in Larry. We all kind of ran in similar circles or lived near each other.

AC: Art History is your most sexually explicit work to date, and it also portrays your character – and you, by extension – in a pretty seedy light. Was that an intentional move on your part?

JS: For me, it was like allowing all the criticisms of me and my work for the past five years to manifest themselves on screen. I wouldn't call it a spoof, but in a way, I'm embodying, onscreen, all the negative things people have said about my work. The character that I play in Art History is a really terrible, manipulative guy who's making a really crappy movie.

AC: So you're trying to preempt more criticism of your directorial style?

JS: My feeling with both Art History and Silver Bullets was that if I'm going to try and make a drama about something but the reviews are ultimately all going to be about me, personally, and what a terrible person I am, manipulating actresses and all that kind of stuff, then I might as well make some films about that, so at least there's a reason to have that conversation. So in both those films I'm playing the version of myself that my harshest critics see as reality.

The thing that's come up again and again since my very first movie is that these aren't films; they're softcore porn. So with Art History I decided to tackle that head-on by making the movie full of sex and not much else. And also I decided to make [the movie] just look bad. Because that's the other criticism that's been leveled at me over and over again, that I'm a sloppy technician and the photography sucks in all of my movies. So Art History is both the most beautiful and the most disgusting-looking movie I've made. I wanted people to be able to have a clear idea of the difference between these two aesthetics.