Inching to the Finish It's difficult to know where to start with Bob Sabiston. Do you start chronologically, with his time at MIT's Media Lab and animation work for MTV? Perhaps you should begin with his calling-card creation, the rotoscoping technology most notably used in Richard Linklater's Waking Life and A Scanner Darkly. Or maybe it's best to use his latest invention as a window into the many artistic faces of Sabiston.

That creation is Inchworm Animation for Nintendo's handheld gaming device the DSi. Those people who aren't into video-game systems or are childless might not have heard of it, but the Nintendo DS series is the second-best-selling game console ever (behind the PlayStation2), with just under 150 million units on the streets. Inchworm can be downloaded from the system's online store onto your handheld, opening up numerous options for the system's built-in cameras, touch pad, and other assorted controls.

The "game" – it's really more of a tool – offers a surprising number of options for a relatively low-powered device, which is telling of the animation know-how and programming skills of the lone man responsible for its creation. That shouldn't come as much of a surprise, since Sabiston has been in the creator-of-cool-things business for a few decades now.

Sabiston's animation career dates back to the late Eighties, when he was a student at MIT. There, he and another student made a six-minute short combining computer and hand-drawn animation. "Grinning Evil Death," about a cereal-powered superkid and a giant mechanical roach, was subsequently sent to MTV and later included in a shorts showcase called Liquid Television, which, interestingly enough, would also feature an early incarnation of Mike Judge's Beavis and Butt-head. On the strength of "Grinning Evil Death" and other student projects, Sabiston would go on to be courted by Steve Jobs as well as the animation team for the original Toy Story. After turning both offers down (!) and selling his animation software to a company that would later use it in part to bring Ren & Stimpy to cartoon life, Sabiston moved to Austin to finish another short film called "God's Little Monkey." That would win him top accolades at Austria's computer graphics festival Prix Ars Electronica in 1995, with the prize money giving Sabiston time to work on his next big project – a project that would come to define his artistic career. 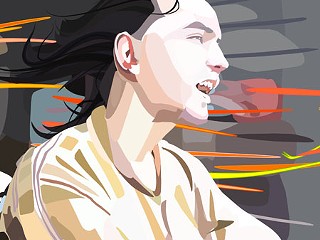 Arguably the most fun tool in the Inchworm arsenal is the ability to draw on top of photos. Take a picture of a friend and put him in space ... or do what I do and give him a tattoo on his cheek that says "poop." You can even take several photos, draw on them individually, and play them like a half-animated, half-live-action film, something Sabiston could teach you a thing or two about.

That layering aspect of Inchworm is a continuation of the game-changing program that Sabiston created in the mid-Nineties during his time spent not worrying about finances. It was called Rotoshop, software that, to put it much too simply, fills in the blanks between hand-drawn frames and filmed footage. The effect is the program's telltale fluidity and lifelike facial expressions, both of which can often be lost in animations without live-action source material. The software, which is the property of Sabiston's company, Flat Black Films, debuted to a rapturous reception in 2001's Waking Life; it later appeared in A Scanner Darkly as well as several shorts, PBS and MTV spots, and even ads for Charles Schwab. All in all, you went to Sabiston if you wanted your video footage to look slightly otherworldly and yet realistic.

Instead of letting Rotoshop become the flavor of the moment, Sabiston was famously exacting about personally approving which projects could use his technology – and he hasn't changed his position. As for ads, Sabiston words his overall thoughts on the matter succinctly: "I hate commercials." That said, while he once considered ads an unthinkable abomination, his stance has changed over the years. These days, he says, "I don't go out and seek commercials, but if someone comes along and offers us the job, I'll usually take it if it seems like it's reasonable and not something too gross." The money from the ads keeps his team of animators fed and able to explore their own artistic outlets. The overall experience of working for an advertiser Sabiston laughingly describes as "character building." The many problems he's faced over the years with both artistic and commercial endeavors makes the laugh well-deserved.

Like most of Sabiston's work, Inchworm's production was an uphill climb that started in 2005, shortly after the original Nintendo DS hit the shelves in late 2004. The dual-screens-and-pen interface immediately made the console attractive as an animation tool in Sabiston's brain, although he questioned whether the device would catch on. When the DS proved to have legs, he contacted Nintendo with the idea, received approval as a developer, and began to tinker with the programming, even though for a year there was no concrete interest from Nintendo. When his contact left the company, Sabiston was left with a half-finished animation tool and no one to publish it.

Then, in 2008, at a developers' convention, several publishers expressed interest in the project, and Sabiston ultimately decided to work with Disney Interactive. But after a year-and-a-half of back-and-forth, the two parted ways due to the publisher's insistence that he "Disney-fy" the game and sign a contract that commit Sabiston to two years of helping the company troubleshoot it.

Fast-forward through a year of Inchworm not moving forward an inch. In 2009, Sabiston was invited to a developers' conference where, it turns out, the Nintendo DSi was revealed. One of the main enhancements over the previous DS incarnation – and what was most appealing to the man with Inchworm still sitting on the shelf – was the addition of an online store, the DSi Shop. Like the App Store at Apple, the DSi Shop skipped the publishing middle man and allowed developers to submit games directly to Nintendo to be released for download to the handheld system. This revelation made Sabiston work almost exclusively on Inchworm for all of 2009 and some of 2010. Artwork created in Inchworm for the Nintendo DSi

But the hurdles weren't yet cleared – not by a long shot. With Inchworm seemingly completed, Sabiston just needed the nod from Nintendo to get the tool up on the DSi Shop. The game would go on to be rejected 14 times, with various "bugs" ranging from using the word "pen" instead of "stylus" to not having a shutter sound play within a split second of taking a photograph. It's hard to fault Nintendo for being overly cautious about what products get the official OK – the company has built a very distinct brand and identity based largely on kid-friendliness. It didn't help that Sabiston had been spoiled by the decidedly more lax approval system of the App Store, which allows developers to update and fix their apps as many times as they need to after an app's release.

Finally, after almost seven months of rejection, Inchworm was approved for release in March of this year. Of course that meant the game's April release came right after the new and much ballyhooed Nintendo 3DS was unleashed in the States, overshadowing the indie release.

Circumstantial difficulties and professional backstabbings have plagued Sabiston throughout his career, beginning, naturally enough, as his star was rising sharply after the release of Waking Life. Before he could say "lawsuit," Earthlink had called, been turned down, and gone on to use an animation effect uncannily similar to Sabiston's signature style that dates back to as early as his short film "Roadhead." (See "Call It a Draw," Aug. 31, 2001.) "That was the start of the trouble," says Sabiston. "It was all downhill from there." Charles Schwab would at least have the decency to hire Flat Black Films for a while before replacing the company with a less expensive look-alike.

Trumping these troubles was the much-publicized drama surrounding Sabiston's work on Linklater's interpretation of Philip K. Dick's A Scanner Darkly. Sabiston's team labored meticulously – the studio would argue slowly – on the film, only to be unceremoniously removed from the project altogether. That's putting it nicely. Let's just say that the locks to their workspace were changed, alerting Sabiston and his team of animators that they were off the job.

Apart from some attention on popular gaming blogs and a featured spot on the DSi Shop, Inchworm didn't get much of a promotional push. Them's the breaks when you self-publish a game. But really, Sabiston's constitutional discomfort with pimping his own work may be the main reason you might not realize you're watching or using one of his creations.

His Line Research animation tool was the backdrop for bands at the 2005 Austin City Limits Music Festival and can also be seen in videos for local band the Black Angels (the psychedelically heartbreaking video for "Doves" really can't be viewed enough). There's the thought-mapping iPhone app Headspace and Voxel, a 3-D pixel animation tool for the iPad that Sabiston describes as "Legos in space." The apps might be designed for a niche market, but all feature scads of functionality without losing usability, a rare combination in the quantity-over-quality world of the App Store.

So, what's next for Inchworm? Aside from a potential move to the 3DS' online store, quite possibly nothing. "If it makes the money back that I put into it, then maybe I'll go ahead and do the 3DS version," Sabiston says, describing a more fleshed-out version of Inchworm that utilizes the new system's increased processing power. However, seeing as how he has already clocked thousands of hours on the game, that might be an uphill battle. If gaming forums are to be believed, then the reception to Inchworm has been overwhelmingly positive, with users impressed by what's possible with the tool compared with previous animation programs for the DS.

Sabiston has other irons in the fire: Lately he's been producing short films directed by members of his animation team, including Jennifer Drummond Deutrom and Mark Deutrom's "Get With the Program," which screened at the 2011 South by Southwest Film Festival. Sabiston himself is working his self-described "limited" connections in Hollywood to find a feature-length script worthy of his Rotoscoping treatment and animatorly eye.

Until then, there might be a bit of decompression. Five years of off-and-on coding and designing can sap the creative juices of even the most prolific mind. "I think the desire to do something has to be there, and once you have that, you have the energy to make it happen," says Sabiston. "I think that's got to come first."

Videos made using Inchworm Animation can be found at austinchronicle.com/inchworm. 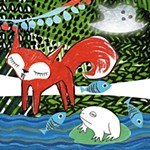