The MALI Conference celebrates a decade of diversity 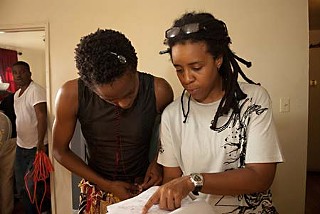 Let's face it: Despite sincere and energetic efforts to make it not so, a lot of arts events in this town end up looking pretty pasty.

The Media Arts & Literacy Institute's Women's Film & Performance Arts Conference, save one notable aspect – the "wholly focused on the contributions of women" thing – does a lot to counter the syndrome of sameness, that Achilles' heel of many a self-declared liberal city.

MALI's diversity lies not just in its participants, but also in the ambitious swath it cuts through media, genre, and format, which produces a festival-conference hybrid that looks both authentically international and regionally representative.

Then there are the keynoters: performance poet Pamela Sneed and Women & Their Work Executive Director Chris Cowden; there are M. Asli Dukan's science-fiction film shorts; Houston's Mildred Dred performing gender, self, and other things; and such nitty-gritty workshops as Texas ASCAP rep Velia Gonzalez on Receiving Royalties and Fiona Zedde on Completing Your Novel.

Now celebrating its 10th year (the first four spent in Houston), the festival is growing, says Poet on Watch, conference director and founder of MALI. "More artists that I would consider midlevel professional artists," she says, "are paying attention to the performance and the conference aspect. And Austin is really starting to embrace us."

Of the diversity of venues, she says: "It's strategic, and it's purposeful. I feel like media should join communities – meaning bring strong artists to strong venues. Some venues might not necessarily get the talent that we're bringing to them, and these artists might not get a chance to perform in these venues because of the fact that they're alternative, so bringing those two things together is powerful. It paints a different landscape in the city. We've got the MACC, we've got the Carver Museum, so I think that covers two different sides of town. Then we flip over here and cover the Westside at the Long Center, so for those people that might not necessarily come closer to the Eastside or Downtown, then it's okay – y'all can catch some of this flavor over at the Long Center. Now we're mixing ZIP codes, right?

"It's kind of like a DJ: I'm spinning different flavors. And with different-flavor spinnin', what happens is you bring in different types of people."

If P.O.W. has a bone to pick, it's that a lot of the city doesn't seem to know about the festival. "We've been here for six years now," she says, "and people are like, 'Where y'all from?' We're here! We're in Austin, Texas."

The MALI Women's Film & Performance Arts Conference takes place Thursday, May 26, through Sunday, May 29. Individual events are open to the public. See www.malisite.org for more information.