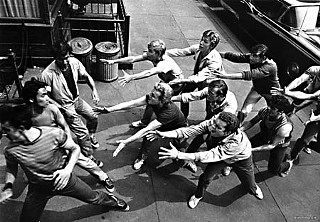 There's a Place for Us

The seeds of the Great New Year's Eve 1968 Sneak-Out Plot were planted as Betsy and I watched West Side Story on television during a sleepover. I'd loved the film from childhood and grew up hearing the magnificent Broadway musical version with "Maria," "Tonight," and "One Hand, One Heart" as lullabies. Amid the snappy stage dialogue, the reimagining of Romeo and Juliet as Tony and Maria in 1950s Manhattan, and the unlikely sight of macho New York gangs blithely fancy-footing down mean streets, I explained to Betsy how hip this film was, which was easy to do because I knew those lyrics by heart. "Listen: 'When the spit hits the fan'? Spit means shit! And this one: 'My grandma pushes tea'! That's code for grass! And what about 'Krup you'?!" I understood gangs: The Sharks were like the Mexican bikers on San Antonio's south side and west side, but the Jets had the song expressing universal youthful desire for acceptance through posturing: "When you're a Jet, you're a Jet all the way, from your first cigarette to your last dying day."

The music was irresistibly romantic to two teenage girls. Betsy was pretty and never at a loss for boys. That was a good thing for her single friends like me, for she wanted very much to meet her latest – forbidden – fling at the Teen Canteen that New Year's Eve. Sweet Smoke was playing, and the idea of being at a club on New Year's was the most exotic possibility so far in my 14 years. The plan was simple: Betsy would spend the night at my house, the boys would pick us up there, and we'd pretend we were going to the movies – West Side Story, because we knew the songs, natch – and then beeline to the Canteen, because when you're a Jet, you're a Jet all the way. And so our illicit New Year's Eve went smashingly, and we giggled victoriously into exhausted sleep at 2am.

The following day we awoke feeling smug, until Betsy's mother unexpectedly appeared at the door to fetch her daughter. "What movie did you see?" she greeted us. "West Side Story," we harmonized. Betsy quickly slid out the door to her parents' car. "May I speak to your mother?" her mother demanded, smiling coldly, as my stomach turned liquid. "She's not here," I hedged, not feeling much like a Jet. That was true, but my dad was home, and that is the real reason I didn't get in worse trouble. "West Side Story isn't playing anywhere in a theatre," he hissed afterward, "that was a stupid lie." So I learned to tell better lies. The incident also successfully ended the friendship, as Betsy and I were forbidden to hang out or call each other, and – surprisingly – we obeyed. It was a decade before I watched West Side Story again, yet I saw it again right as punk rock broke. You know what? Early punk rockers – before tattoos and Mohawks – looked just like those guys. When you're a Jet ....