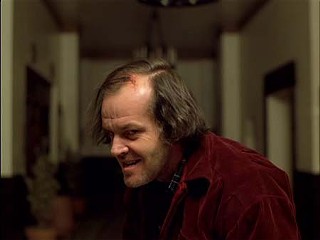 Parental Accompaniment, Not for the Prudish

You never forget your first time, your first glimpse of onscreen nudity. No matter what age you might have been at the time, that initial frisson of sexualized imagery – 24-fps flesh in all its shame-lust glory – is seared into your mind, a milestone, a coming-of-age, a moment in your personal history that marks the inky-dark borderland between being a kid at the movies and being an adult at the cinema. My first time, though, was less titillating than terrifying, made all the more so by the fact that my father was sitting beside me, in the dark, on Friday, May 23, 1980 – the day Stanley Kubrick's riveting adaptation of Stephen King's The Shining opened.

I'd been a King freak for years, ever since reading the embossed, black-jacket paperback of 'Salem's Lot, and so, technically, I already knew what lurked in the Overlook Hotel's bad place, the dread Room 237. Kubrick trumps King here, outfitting the dying room with a ghastly mauve sofa (peekaboo!) and unmatching peacock carpet that positively screams psychoses galore. As Jack Nicholson, unhinged as haunted alkie-author-cum-bad-dad Jack Torrance, makes his way toward the suite's bathroom, I quailed in my chair, knowing what was coming. The art deco, morgue-green porcelain; the half-drawn shower curtain; the thing in the tub. It wasn't as I'd imagined it, though: Torrance, disheveled, clearly terrified, is glued to the spot as actress Lia Beldam, in her one and only role, pulls back the gauzy veil and steps out of the bath, languorous, blond, full-breasted, and troubling. Nicholson, predictably, wonderfully, leers.

You're never, to the best of my knowledge, entirely comfortable watching a full-frontal nude image of the opposite sex with a parent onboard. But Kubrick knocked both my dad and me sideways into hell, as Beldam's beckoning fair one embraces Nicholson and transforms – accompanied all the while by the downward spiraling strings and shrieking brass of Rachel Elkind and Wendy Carlos' score – into the cackling, bloated corpse of aged Billie Gibson. Nicholson runs. The whole sequence is a masterpiece of dialogue-free filmmaking, a master class on how to build truly unnerving suspense, and a primer on why you should be careful which R-rated movies you beg your father to take you to on opening day. Upon exiting the theatre, my dad, a surgeon and longtime veteran of real-life death, remarked: "How 'bout that shower scene? That's just what a waterlogged body looks like, too!"