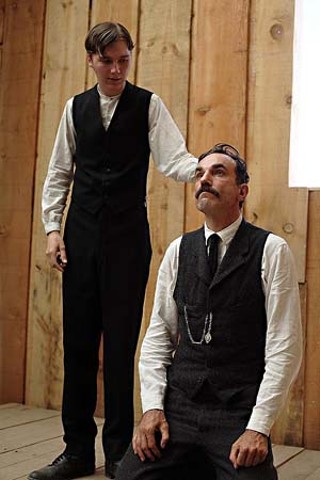 My brother, Jeremy, is a complicated guy. He's a music teacher, father of two, incredibly smart and funny, but he keeps to himself for the most part. He loves Phish and Sufjan Stevens and St. Vincent, but he is probably the closest thing to a jazz aficionado I've ever known. In fact, he once harbored dreams of getting a doctorate in jazz theory so that he could call himself "Dr. Jazz." It is Jeremy's love of jazz that helped unlock There Will Be Blood for me; without his intervention, I might have forever written off the film for its lack of shopping montages and kicky bubblegum soundtrack.

You see, jazz is all about active listening; you can't get the full experience of the music if you sit back, a passive consumer. You have to trace the motifs and phrases, listen to the way a note turns into an emotional expression and the way that the players interact with one another. The more you practice this kind of active listening, the more textures the music takes on. I see my brother's practice of this technique in his approach to film appreciation. Where I tend toward the big, escapist movies, he is more drawn to the quietly contemplative, slow-burning films like The Assassination of Jesse James by the Coward Robert Ford and There Will Be Blood. Where I emit an obnoxious, yawned "bo-ring!," he settles in with a good beer and a brain that's ready to engage.

When I asked him what it was about There Will Be Blood that made his skirt fly up, Jeremy specifically mentioned the long scenes and close-up shots. "They are demanding on the actors and the audience alike," he said, and he's right: A close-up shot of someone who isn't speaking, only glaring, is a direct challenge to the gazing audience, and director Paul Thomas Anderson isn't letting anyone off the hook. The same logic applies to the long stretches of silence, where there is no dialogue except that between man and landscape. "The space in between the action tends to put more weight on the depth of the story," says my brother. Meanwhile, Daniel Day-Lewis as Daniel Plainview and Paul Dano as Eli Sunday are two impresarios, circling around each other in a deadly duet, taking turns humiliating and debasing one another in a sustained grapple for power in the name of God and mammon. These were the things I noticed after I listened to my brother and divested myself of my desire to be entertained. I still am not sure what "I'm finished" means, though.