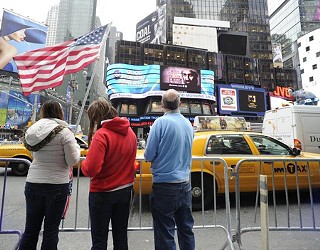 Donald Trump was the original topic of this week's "TV Eye," but that was before Osama bin Laden was killed. I can't begin to tell you how pleased I am that The Donald is obliterated from the news cycle once and for all. However, unlike the responses I've read and heard about the bin Laden killing, my response is less celebratory.

To be honest, my first response was elation but not because of the killing. I find it bizarre to celebrate the killing of another human being no matter how "evil" they are; in the same way, I find it bizarre that certain abortion opponents have no problem bombing an abortion clinic. I'm more in sync with the sentiment flying through the Twitterverse (inaccurately attributed, it turns out, to Mark Twain): "I've never wished a man dead, but I've read some obituaries with great pleasure." No, I was elated because President Obama had done something that squashed Trump, the birthers, and his other numbskull detractors who have been using up precious oxygen. But then, like the cold front that fell over Austin hours before Obama made the official announcement of bin Laden's death, a chill came over me.

The larger public response to the bin Laden killing was swift and occurred most vociferously on Twitter. Comments ranged from the profane to the patriotic but in all cases were fierce. On TV, the first sights and sounds of the U.S. response were of people filling the streets in front of the White House and at Ground Zero in New York City, the former site of the Twin Towers felled by the hits that were ordered by bin Laden and carried out by al Qaeda. While comments from those on TV were more measured than those on Twitter, what was most striking was how vacuous they were. "We have closure" was the most common refrain, followed by expressions of "relief" and declarations of "justice being served." When one young woman, who'd obviously been partying for some time, was pressed for a more specific response, the most she could sputter was:"He's gone! He's dead! This is huge!" She then fell back into the fervent throng behind her, a crowd that eerily resembled a similar street scene half a world away on Sept. 11, 2001, when the World Trade Center was attacked.

I wasn't in New York on 9/11. I'm not a New Yorker, but I am an American, and I remember feeling that intensely in 2001. I remember rushing to turn on the TV when I heard on the radio that a second plane hit the World Trade Center, my heart pounding and a sick feeling overtaking me. I watched the towers fall in real time on TV. It was a heartbreaking, frightening day. But when I heard of bin Laden's death Sunday night, I didn't feel avenged. Instead, and I'm not sure why, my thoughts consistently returned to two things as I cycled through the news channels and read Twitter posts: First, who was the woman killed during the shoot-out at the bin Laden compound? Was she someone's mother, someone's sister, a wife, or bin Laden's nurse, perhaps? Because the news reports indicated that someone in the bin Laden camp used her as a human shield, she will most likely go down in history as "collateral damage." Second, did the celebrators outside the White House wake up the Obama girls? If so, is this how the president and Mrs. Obama explained their raucous activity?

"They're happy because Daddy ordered a hit on a bad man. Go back to sleep. You have closure now."

And what of the children left physically unharmed but surely traumatized during the attack on the bin Laden mansion? I can't help but wonder if land mines of retribution and the need to "find closure" have now been planted in their young hearts and minds.

When George W. Bush, the "Mission Accomplished" president, was asked to comment, cable news sources reported that he called the bin Laden killing "a victory for peace."

Oh, it's clear that the mission was expertly executed. (This time, the mission really was accomplished.) But if peace is the expected outcome, I suspect that the reality will prove something much less festive in the years to come.