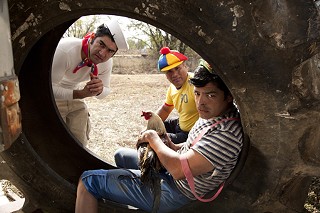 "Action! Comedy! Violence! Fantasy! Romance! Lust!" Okay, the exclamation points might have been our editorial add-on, but with that kind of a-little-something-for-everyone boast, it's hard not to get exclamatory. Sergio Carvajal's El Gallo is a locally produced miniseries in the making (a discrete short from the series, "Niño Gallo," screens on Friday), and the team behind the project will deliver one of four free and open-to-the-public Master Classes at the new Black Box Theatre at the Emma S. Barrientos Mexican American Cultural Center. Other participants include filmmaker Carmen Marron, who will discuss the journey of her narrative feature competition film Go For It! from conception to distribution deal (Lionsgate is releasing it theatrically in May); Andrés Martínez Ríos, founder and director of Aatomo Rentas/Chemistry Cine, who'll talk about the current state of international cooperation in production and post-production; and Trina Calderon, the co-writer and associate producer of the CLA film Down for Life, a narrative piece set in South Central Los Angeles about a 15-year-old gang leader's attempts to strike out on her own.