Feeling lukewarm about 'Ice and Fire' kick-starter 'Game of Thrones'

"Epic" is a PR buzzword you could use to describe the much-anticipated HBO series Game of Thrones. "Sweeping," "bold," and "grand" would be other obvious descriptors for this big-budget, big-concept series. Here are some words I would use: misogynistic, gratuitously violent, vulgar, and ultimately, one-dimensional.

The hype for Game of Thrones has been brewing for weeks. So when an advance screener of the pilot finally arrived, I was eager to dig in. However, getting through that first episode was a lot like being on a first date with a handsome stranger: Oh, you know you want to experience every inch of him, if only he didn't have to talk.

Let me start with what's appealing about Game of Thrones. First and foremost, from the stylish opening credits to the stunning cinematography, it is simply luscious to watch – especially so for those who love big, historical dramas with sweeping panoramas. Based on the bestselling fantasy book series A Song of Ice and Fire by George R.R. Martin, the series takes viewers into a world that leans more toward a fictional reality than a place steeped in the whimsical or supernatural. The setting is Westeros, a continent divided into seven distinct kingdoms ruled by several powerful families. These families have risen to power through war, arranged marriages, corruption, and inheritance. As you might expect, no family is content with its fair share. Old grudges, inflated egos, and a powerful sense of entitlement spur members of these families to seek fortunes beyond what they have. Greed, ambition, and desire are the source of all the drama. These are enormously rich sources, of course, but the narrative notes, in comparison to the imaginative and vivid execution of the set, costumes, and cinematography, come off as tinny. To extend the metaphor: Narratively, the series hits all the whole tones, but there are too few sharps and flats for nuance.

The time period is not named, but the overall feel is medieval. No, I don't cling to ideas of an idyllic pastoral era when good, earthy people toiled under the rule of a benevolent despot whilst bluebirds sang above them. I imagine life was rough and filthy and morally crude. But I can't help but be disappointed that when given the opportunity to create a new fantasy world, the choice was to undergird that world with leaden ideas based on male dominance, where women are subjugated and "the other" is cast as inhuman at best, or dark and debased at worst. (To be fair, some of my complaints might be with the original books, which I haven't read.) Then again, that nefarious-seeming stranger is still worthy of marrying your sister if it'll help a guy win back his throne. Here's how Prince Viserys Targaryen (Harry Lloyd) explains the situation to his timid sister, Princess Daenerys Targaryen (Emilia Clarke), on the day of her arranged marriage: "I would have you fuck all the Dothraki and their horses." That he lewdly fondled her naked body before saying this adds to the suffocating weight of his oppression.

To say that Game of Thrones relies on the most primary of male fantasies is an understatement. A humorous representation of this comes when the patriarch of the Stark family (Sean Bean as Lord Eddard "Ned" Stark) sits beneath a tree and slowly but deliberately polishes the long, stiff blade of his impossibly shiny sword. In the second episode, an adult tells a youngster that the most special swords are named. Surely I won't be the only one guffawing.

Game of Thrones starts as many other action-adventure stories do – with a great roar fueled by spittle and blood. But the bloodletting and violence and sexual exploitation in Game of Thrones does not feel earned as much as it feels gratuitous. And that is a shame. The performances are strong, even as most of the actors are working with characters that do not resonate beyond a few base notes. And while Peter Dinklage as Tyrion Lannister makes a potentially appealing rogue and there are hints of a more complex future for the youngest Stark daughter (Maisie Williams as Arya Stark), you'll have to gag your way through the pilot to see if that promise is realized.

Game of Thrones premieres April 17 at 8pm on HBO. 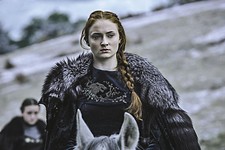