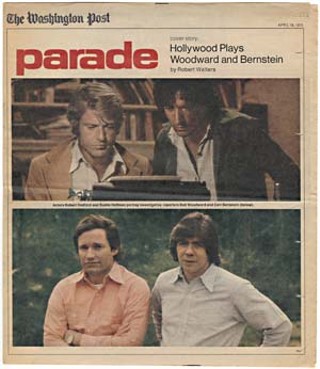 A 1976 Parade magazine cover, part of the HRC's Woodward and Bernstein collection

The Harry Ransom Center at the University of Texas, which holds the Woodward and Bernstein Watergate papers, has a series of events and exhibits planned for the 35th anniversary of Alan J. Pakula's All the President's Men. Materials related to the film and the Watergate scandal are currently on display as part of the HRC's exhibition "Culture Unbound: Collecting in the Twenty-First Century." A free screening of the film will take place Saturday, April 16, 2pm, at the LBJ Library Auditorium. On Thursday, April 21, at 2pm, there will be a panel discussion on the topic of "Could the media break a story like Watergate today?" at the LBJ Library Auditorium; panelists include Bob Woodward and Carl Bernstein, Peter Baker of The New York Times, Dana Priest of The Washington Post, and Mark Miller of the Texas Tribune. At 6pm the same day, Robert Redford will join Woodward and Bernstein to discuss the film's legacy, also at the LBJ Library Auditorium. All events are free and open to the public, but tickets are required for entry; see www.hrc.utexas.edu/events for information.