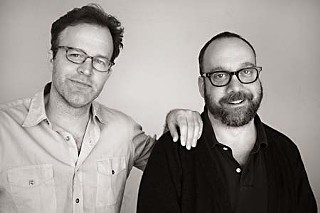 It began as a joke between two old high school wrestling buddies: Let's write a movie about the sport, they laughed. Wouldn't that be cool? Let's do it. Let's write about us. In the end the "us" was our modern-day American society, warts and all. And the warts grew as the script coalesced into a completely human tale.

Thus the seed was planted that grew into Win Win, a comic drama co-conceived by Tom McCarthy and Joe Tiboni. Yes, it's about high school wrestling, but Win Win digs just as deeply into the human psyche as director McCarthy's critically acclaimed, brooding films The Station Agent and The Visitor. Like McCarthy's previous films, this one is about the creation of an unlikely surrogate family. Paul Giamatti stars as Mike Flaherty, a New Jersey attorney specializing in the elderly and floundering financially. Flaherty makes a bold, surely illegal move that entangles his life with an elderly client's family, including an odd, troubled high school wrestler trying to escape a dysfunctional home. Outside of the office, the attorney volunteers as a wrestling coach for a really bad team and convinces the boy to join up.

Tiboni works as an elder care attorney in the same New Jersey suburb of New York City where he and McCarthy grew up. Tiboni has a wife and two kids. He's settled and happy. "I'd never collaborated before," said McCarthy, who got his start in sketch comedy and then as a well-known actor before moving to the other side of the lens (one of his more prominent acting gigs was a stint on HBO's The Wire). "It was a fun experiment. We were old friends now in our 40s who had gone in different directions. I spent a lot of time with him, and we got to know each other as adults. I could see how he lives in his world. It was not my dream to live in the suburbs, but it was his."

Despite its comedic elements, Win Win treads a lot more serious ground than high school sports and old friendships. McCarthy is just as interested in the current American zeitgeist in the wake of a failing economy and how it relates to the issue of very human selfishness. "We kept going back to Enron as a role model," McCarthy said. "Bad decisions were made, but they also did a lot of good. Andrew Fastow, the CFO of Enron, went to our high school. He played soccer in my brother's class. We were interested in how Wall Street applies to Main Street. What I didn't want was finger pointing."

McCarthy started small and light with the film, but separate storylines began to mesh and take on textures. "After The Visitor I wanted to swing the needle in the other direction," McCarthy said during a stop in Austin during the 2011 South by Southwest Film Festival, where he was joined by Giamatti and co-star Amy Ryan (The Office). "I was interested in exploring an idea, and in some ways we are always writing about our own lives. I think we have a personal responsibility to create a code we live by. As we get older, we have to have an internal source of regulation."

McCarthy went to another old friend to play the lead role. He and Giamatti have been friends since attending Yale Drama School more than two decades ago. "He was this guy I went out and got drunk with," Giamatti said of McCarthy. "Then he started making these wonderful films. He's an actor. He's a really good actor and a very precise guy. He knew me. He knew my tics, and he wouldn't let me go there." Audiences are likely to be drawn to Giamatti's sad-sack attorney despite his moral slip. "I liked the world of it. We're portraying middle-class America. He's a good guy," Giamatti said of the character. "I don't get to play those very often. At the end it hits you in the face – he did something illegal!"

Perhaps just as fascinating is Win Win's braiding of the professional and the amateur. Along with first-time writer Tiboni comes first-time actor Alex Shaffer as the young wrestler. McCarthy had to make a choice between an actor who didn't know how to wrestle or a wrestler who had never acted. He chose Shaffer. "Two weeks before we started, he became the New Jersey wrestling champ," Giamatti said. "He had no baggage at all about acting. I think it focused me a little more." Indeed, Shaffer's inexperience doesn't show. Instead, his athlete's mumbled cadence and physical self-assuredness go deep, and he is the conscience of the film. The boy eventually calls out Giamatti's attorney for his illegal act. "All kinds of kids come out of broken homes," McCarthy said. "This kid is a survivor. He has a specific code of what he does and doesn't do."

Ryan portrays Giamatti's wife in Win Win, and her daughter was 6 months old when filming commenced. It left her feeling very protective of her onscreen kids. "If some skinny, scary teen showed up on my doorstep, I'd say, 'Hell no, you're not coming into my house with little girls here,'" she said of what happens onscreen with Shaffer's character. But the story worked for her because of the humanity humming within this commingled family. McCarthy "is so compassionate toward every character he writes," she said. "There are four incredible female characters in this film."

That compassion and the film's genesis in an old friendship is what drives the story, which has drawn comparisons to another indie film starring Giamatti, 2004's surprise hit Sideways. But ultimately the film boils down to one question. "What happens when seemingly decent people make these really bad choices?" McCarthy said. "It's my belief that for the next 20 to 30 years we'll be dealing with this. There's always a temptation to take what is sitting there on the table."