All right, I admit it. I am entertained by soapy series like Grey's Anatomy. Part of my amusement springs from the storylines' ridiculously accelerated pace. Wasn't it just two episodes ago that Callie (Sara Ramirez) revealed that she was pregnant? Now her baby bump is straining against her hospital scrubs.

But there's something to be said for stories that unfold languorously, as they do in The Killing. That's not to say that nothing happens in this new AMC series, but like the main character, Homicide Detective Sarah Linden (Mireille Enos), this new series is a long-distance runner, not a sprinter. And its noiresque setting – a relentlessly overcast and rain-drenched Seattle – is very different from the sparkling city-of-lights version of Seattle in which Grey's is set. In The Killing, you can almost feel the mud beneath your feet, the uneven ground. So you are compelled to move at a slower pace, much like Sarah as she sorts out the physical evidence and tries to sense the unseen in order to solve a mysterious murder.

At the center of the mystery is Rosie Larsen. She's a good girl from a working-class background, a high school senior on the verge of starting her life. It's bad enough she's found dead. It's where she's found that raises eyebrows and sets viewers' minds racing as to what the circumstances of her death might have been.

AMC is spending a lot of its social-networking efforts to ignite a "Who Killed Rosie Larsen?" campaign. I don't see it catching fire, mainly because Enos' enigmatic Sarah is much more arresting. Unlike other members of her TV crime-fighting sorority – Helen Mirren's trailblazing Jane Tennison from Prime Suspect, Kyra Sedgwick's Brenda Leigh Johnson of The Closer, and even Mariska Hargitay's Olivia Benson (Law & Order: Special Victims Unit) – Sarah is not a beautiful flower with sharp edges, a wounded warrior, a feisty good ol' gal, or one of the guys you secretly want to bed. Detective Sarah Linden is a loner. She has the respect of her peers because she is good at her job. Part of the reason she's good is because she's patient. It allows her to lie in wait until the truth reveals itself. Still, at the beginning of The Killing, Sarah is ready to give up her career to marry her boyfriend and move with her young son to California to start a new life.

The Rosie Larsen murder occurs as the movers are emptying Sarah's condo. Because she's approaching her final hours on the job, she is happy to pass the case on to the new guy, Detective Stephen Holder (Joel Kinnaman). But something changes when Sarah looks upon Rosie Larsen's corpse. You can see the light drain from her plain yet lovely face, while those around her purposely look away or busy themselves with the business of mapping the crime scene. Between Stephen's ineptitude (he's recently switched from narcotics to homicide), his off-putting crassness, and Sarah's undeniable need to solve the case, she delays leaving, which may create some tension with her fiancé as the series progresses, as he's already left Seattle and waits for Sarah.

As far as murder mysteries go, The Killing is fairly conventional, with the usual twists and turns, and a few red herrings. What makes it stand out is Enos' careful, delicate performance and the way the overall production uses a verdant Seattle, embracing its luscious beauty while also making one aware that beneath it all, something creepy-crawly lurks.

The Killing begins with a two-hour premiere, Sunday, April 3, at 8pm on AMC. New episodes air Sundays at 9pm. 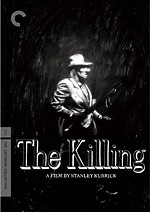 The Killing
As with the proto-New Wave French gangster epics of the period, the heist's the thing in this early Kubrick film