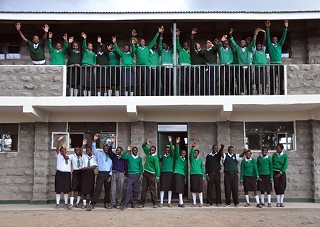 If you're craving a medicine for melancholy – and what with the nonstop, 24-hour catastrophe party that current events have been lately, who isn't? – you need look no further than 2011 South by Southwest Film Lone Star States Audience Award winner Building Hope. Directed by Austinite author/actor/filmmaker Turk Pipkin as part of the ongoing Nobelity Project he runs with his wife, Christy, Building Hope is the third documentary feature from Pipkin, after Nobelity, in which he tracked down and queried nine Nobel Prize winners about how to best help our struggling world, and One Peace at a Time, which found him putting those practical lessons to use around the world. In one instance, clean drinking water and electricity for a primary school in Mahiga, Kenya, were the immediate results, quickly followed by a computer lab and a huge uptick in the ramshackle school's heretofore middling success rate. Sometimes it takes a village, and sometimes it takes Turk and Christy Pipkin (and Willie Nelson).

"The world's a big problem," says Pipkin. "That's the way it comes across for most people. It's hard to know where they can fit in, so most of them just click off. They want to click on, but it's still hard to find a place [to help] that fits you or where you feel like you can actually do something."

Building Hope returns Pipkin to Mahiga and follows the construction of Mahiga's first-ever secondary school, designed from the ground up by architect Greg Elsner. An Architecture for Humanity design fellow, Eisner volunteered to live in Mahiga for a full year while his simple, sustainable design (which included a full basketball court with a sloping roof to collect and purify the drought-prone region's precious rainwater) came to fruition. The result is nothing if not inspirational Red Bull for the humanitarian soul and proof positive that you – yes, you – can help fix our broken world and make a difference in the lives of countless others without succumbing to compassion fatigue or worse, total altruistic meltdown.

"You can't expect the developing world as a whole, but especially Africa, to ever change unless you have universal secondary education," notes Pipkin, who also helped to supply the school with its first-ever library: a thousand books donated by Austinites and others.

"The people who supported this work feel very connected to it," says Pipkin, "and they got just as much out of building this high school as the kids over there did. And that sounds [clichéd], but John Lennon really was right: 'The love you get is equal to the love you give.' The more it benefits the kids in Mahiga, the more it benefits people here. That's the ultimate idea, whether it's for people in East Austin or people in East Africa. The more connected you are to the world, the better off you'll be."