Last fall, Andrew Lanham had a really good week. In the span of four days, he was selected as one of six $30,000 winners of the prestigious Nicholl Fellowship, followed by a first-place prize for Best Drama Screenplay at the Austin Film Festival. The script was The Jumper of Maine, about "a paramedic with Tourette's Syndrome [who is] forced to come to terms with his life and condition when he falls in love." Lanham, a Master of Fine Arts candidate in his last semester in UT's Department of Radio-Television-Film, developed the script at the University of Texas Film Institute, producing two full drafts of the script. After a public reading sponsored by UTFI, Lanham submitted his script to the competitions on the recommendation of a professor, then devoted a summer to producing a new draft, one that "erased three of the major plot lines," he says. The irony? "Once the older draft won the awards," says Lanham, "I had to abandon the new draft."

But he'll have fresh notes to work with soon enough. Lanham's script was handpicked from the six Nicholl Fellowship winners for a unique public reading put on by Ballroom Marfa, a nonprofit cultural arts space situated in the West Texas artists' mecca. Dallas' John S. Davies will direct Dallas actors Drew Wall and Angie Bolling in two performances this weekend, followed by Q&As. "Now, after Marfa," says Lanham, "I'll hopefully be moving into a newer new fourth, actually fifth, draft ... if that makes any sense at all."

Lanham has already signed with an agent and management team, and Donald DeLine of DeLine Pictures is attached to the script as the producer. The next logical step is Los Angeles, right?

"I'm finishing out graduate school here. ... I know I'm incredibly lucky to have gotten my foot through the door of L.A., but you never know what's going to happen, so I wasn't about to not get the M.F.A. I've been working toward. And then I plan on jumping ship to New York. I tend to walk in the evenings to figure out what I'm going to write in the mornings, and New York is a good walking place."

Ballroom Marfa's performances of The Jumper of Maine take place Saturday, March 26, 3pm and 8pm, in Marfa, Texas. The performances are free, but seating is limited, and reservations are strongly advised. See www.ballroommarfa.org for more. 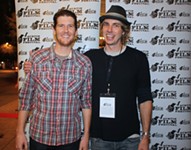