SXSW outtakes; in line with Roger Ebert; and bad karma 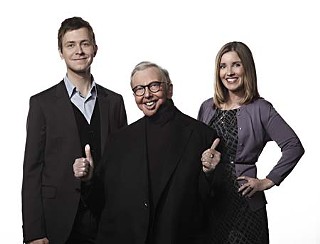 In case you hadn't noticed, South by Southwest is in full swing. I help cover the event from top to bottom and as TV Eye, I try and make it to as many TV-related events as possible. I'll share a few highlights in this week's "TV Eye," but more are available online at the Picture in Picture blog (austinchronicle.com/pip).

Splitting my time between prowling the Festival, attending parties (it's work, mind you), writing, and occasionally sleeping, I've not spent much time in front of an actual TV set this past week. I know I'm missing all the tsunami and earthquake televised coverage from Japan, but what I'm seeing and reading online is frightening. There's something discombobulating about seeing those images of devastation and reading those reports, then walking through what's become a circus atmosphere in Downtown Austin. Literally: There's a carousel set up in the parking lot at Fifth and Colorado, and more outdoor stages are appearing in formerly empty spaces and parking lots as the Festival transitions from Interactive and Film to Music. But my beat is TV and media, so let me get to a few of my TV SXSW highlights, as of press time.

Best panel: It's Not TV, It's Social TV. This lively and engaging panel on how those in the TV industry are using new media to create a richer, more viewer-centric TV-watching experience gives me faith that we're moving beyond the "new media as an extension of commercials" idea of interactive TV. A complete recap of the panel appears online.

Another great panel: The @BettyDraper Writing Workshop. Helen Klein Ross (aka @BettyDraper, after the Mad Men character) showed that Twitter is not for twits with her useful pointers on the hows, whys, and whens of tweeting. Read my full recap of her workshop online, including her five helpful tips.

Best brush with fame: Standing next to Roger Ebert at the State Theatre. We were both there for the screening of competition film Happy New Year (he's one of the narrative competition jurors; I was there as a reviewer). It's been a long time since I've been starstruck, but I was. Standing near the Pulitzer Prize-winning film critic, watching him interact with those more daring than me, I was instantly reminded of how I used to watch him back in the day, when he appeared with Gene Siskel in Siskel & Ebert At the Movies, and on Sneak Preview. In retrospect, I realized that those TV series dedicated to film criticism – not film promotion, but real criticism – had a deep impact on how I try to approach my own work. I still have a long way to go to meet Ebert's standard, but it's a standard worth pursuing.

In case you hadn't heard, Ebert made a return to the small screen with his new PBS series Ebert Presents At the Movies. This reimagined rendition of At the Movies features a younger generation of film reviewers handpicked by Ebert, including co-hosts Christy Lemire of the Associated Press and Ignatiy Vishnevetsky of Mubi, with regular contributors like Sunset Gun's Kim Morgan and Omar Moore, film critic and editor of www.popcornreel.com. Ebert also weighs in with a video essay or a review in each episode (with the assistance of computer-generated voice technology).

Ebert Presents At the Movies airs Saturdays at 5:30pm on KLRU. Go to www.klru.org/schedule for additional airdates and times.

Best "tell me more" moment: Leaving the screening of the new documentary feature Conan O'Brien Can't Stop at the Paramount Theatre last Sunday, I ran into Moses Silbiger. He's the Austinite I interviewed last month regarding his experience working on the first crowdsourced TV series, Bar Karma (see "'Karma' Chameleon," Feb. 25, 2011). Now that the episode he contributed to has aired, he has a much different take on his experience. We didn't get deep into it, but when he told me he wished his name weren't attached, I knew that TV Eye would have to do a follow-up after SXSW. Can't wait.