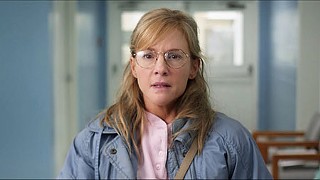 
It's no stretch to imagine the many small, religious towns in Texas probably brimming with devoted, unappreciated housewives – so it'd be easy to write another tragedy about a forgotten woman, slam religion, invoke pity, and call it a day. But Natural Selection, a comedy, free of heavy-handed messages, focuses on the growth of a religious and naive but wholly likeable housewife, Linda White (Harris), who heedlessly agrees to retrieve Raymond (O'Leary), the illegitimate son of her dying husband (Diehl) for a first and last visit. Unfortunately, transporting Raymond – who carries an arrest warrant, a drug habit, and a potty mouth – back to Texas from his home in Florida proves more difficult (and hilarious) than first anticipated. No matter. Linda remains entirely sweet but unrelenting in her efforts. And as the journey's escalations continue, Linda responds with an increasingly open mind, producing a self-discovery story full of Waffle Houses, trailer parks, and small-town congregations, but steered clear of sentimentality.