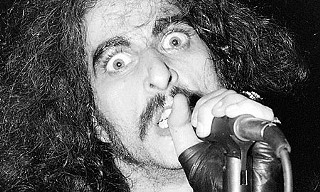 
Bobby Liebling, the 60-year-old vocalist of a once-promising, now-forgotten heavy metal band called Pentagram, is wasting away in his parents' basement in suburban Maryland, lost in a decades-long haze of heroin, crack cocaine, wasted potential, and self-loathing. Meanwhile, in the real world, Sean "Pellet" Pelletier, a music obsessive and all-around decent guy, discovers a Pentagram record and decides he's going to be the one to get Liebling out of the basement, back onstage, and into the record contract he deserves. What follows is the kind of story any Hollywood screenwriter would kill to have come up with: Liebling falls in love, he kicks the drugs, he relapses, he goes to prison, he kicks again, he makes moves toward career resurrection, he makes moves away from career resurrection, and he squares off with his demons, which are always there, beckoning him back into the basement. Last Days Here is an unsentimental look at the self-made obstacles blocking the road to redemption and the stubborn, irrational constancy of friendship.