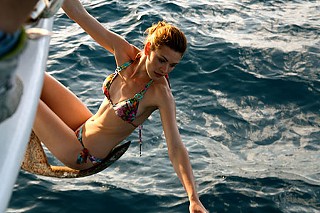 
The rules of the sea are almost superstition. So when the captain of the yacht The Hedonist tells his vacationing Australian passengers that his sole law is "Don't be that dick head," something fearful will follow its breach. When self-indulgent surfer Bull (Oxenbould) and nice-guy Rob (Lyndon) jealously compete over emotionally volatile Sam (Betts), that rule is bound to be broken, and with bloody consequences. Mention Aussies lost at sea, and the compass points to Dead Calm, and Blaiklock adds the quasi-documentary style of Open Water as an undercurrent. A small boat, a big ocean, and some bad intentions are all you need for horror, but Caught Inside exceeds its ship-in-a-bottle paradigm. The atolls of the Maldives look gorgeous and dangerous, and the surf footage is shot with a documentarian's eye for wild places. Yet the true force of nature is Oxenbould's brilliant turn as Bull, by turns preening, sympathetic, and brutal.