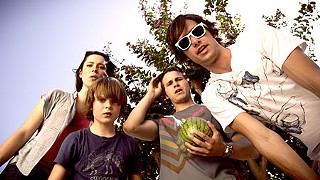 A Bag of Hammers


First-time director Crano, co-writing with actor Sandvig, brings us a murky comedy with snappy dialogue between Sandvig as Alan and Ritter as Ben, childhood buddies turned semiadult scammers. Faced with an already tough, orphaned neighborhood boy (played precociously by Canterbury), Alan and Ben eventually have to make some precarious decisions, which, though couched in well-acted sequences, are not enough to support this urchin-kid-comedy-turned-catastrophe. The scenes between Ritter and Sandvig are taut and fresh with chemistry, a surprise cameo by Amanda Seyfried is cheering, and the performance by Hall, as Alan's sister, Mel, stands above the rest, but this film struggles with what it wants to be as tragedy and laughs fail to find middle ground.