He Knew Just the Guy for the Job 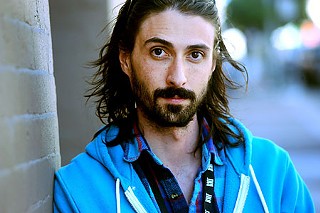 In American Animal, Los Angeleno Matt D'Elia plays Jimmy, an engaging, narcissistic, terminally ill eccentric who takes three friends on a 24-hour trip through his own private phantasmagoria of humor, pain, performance, and delusion, hoping to free them, and himself, from the shackles of normalcy and inevitable doom. The Austin Chronicle recently sat down with D'Elia – who also wrote, directed, co-produced, and co-edited the film – to talk about South by Southwest and the surprising benefits of directing yourself in a movie you wrote.

Austin Chronicle: This is the first festival for American Animal, right?

Matt D'Elia: It is. We actually finished the movie at the end of last summer, but we wanted to save the premiere to hit the home run. And for us, the home run was really Sundance or South by Southwest, which is kind of a testament to how big a platform South By is now. We didn't get into Sundance, but we took it in stride because we knew South By was there.

AC: Are you an actor by training?

MD: Not at all. I've always enjoyed acting, but I've never pursued it. I was always more interested in writing and directing. I knew the script demanded a really great performance, and at the same time, I wasn't able to get the attention of the great actors I knew could do it. I knew I had to trust an unknown. I was auditioning people, meeting people, and nothing was feeling right. It came down to: Who's going to have the responsibility, who's going to have the burden to carry the film? And I just thought, "I get it; I know it; let's give me a chance."

AC: Jimmy's collapse feels like the meltdown an actor would go through: the costumes, the accents, the desire to put on a show.

MD: People would read the script and say: "This is an actor's dream role. He does everything, and he's crazy, and he really goes somewhere." My favorite films always have these big, crazy performances, sometimes over the top, sometimes not, but they carry the film. And that's just kind of how I write. I guess everything I write is kind of me, but it wasn't really the actor in me writing this. I just wanted to see the performance, whoever was going to play it.

AC: Was it difficult directing yourself?

MD: In a way that I hadn't expected, it became a little bit easier. As an actor/director, if I needed to get a certain reaction out of someone, I could direct an actor by acting in a way I thought would warrant the proper reaction. The whole movie, everybody was reacting to Jimmy and to me as Jimmy, so I could do something and the actors would always react in the right way. So that helped me not have to get in the face of any of the actors.

MD: Next is a neo-Western thriller called Hells Bells and Buckets of Blood, my foray into genre filmmaking, which we're actually going to shoot here in Austin in late summer [or] early fall.