The Innkeepers: You Can Check In, But You Might Not Check Out

It all started in 2008 when director Ti West was shooting his paranormal creepfest House of the Devil. The cast and crew were all staying in an old inn called the Yankee Pedlar Inn in Torrington, Conn. "It's just a weird, kooky, bizarre place," West said. "There's this mix of 1800s historical and really bad Seventies renovation, and the staff that works there is kind of the same. It's all these young people who have these part-time jobs, but in this oddly historical place." According to locals, the crew were not the only residents. Like a lot of old buildings, the Yankee Pedlar has its fair share of ghost stories. A die-hard skeptic, West admits to a fascination with paranormal investigators and the recent resurrection of such supernatural reality shows as Ghost Hunters and Paranormal State. He said, "These are people who devote their lives to discovering ghosts, and they have absolutely not a shred of any evidence whatsoever." That's not to say he didn't have his own share of odd events at the Pedlar. He recalled: "People would say doors would open and close by themselves, phones would ring by themselves. The power would go on and off in my room." While the odd occurrences did not turn him into a believer, West said, "I was talking to a friend of mine about the experiences there, and I went, 'I should just write that movie.'"

The components flowed together to create what West called "a very traditional three-act ghost story": a creepy old inn, the legend of an unquiet spirit walking its halls, and the last remaining employees – mousy clerk Claire (Sara Paxton) and amateur paranormal expert Luke (Pat Healy) – who do a little ghost hunting before the hotel shuts for good. West knocked out the script in a week, then called the Pedlar and asked if he could shoot there. Seems he and his House of the Devil crew must have been good guests, because they happily agreed. West said, "If they had said no, I would have just thrown the script away, because I don't think I could have filmed it anywhere else."

"People would say doors would open and close by themselves, phones would ring by themselves. The power would go on and off in my room." Ti West on the real Yankee Pedlar, workplace for his blue collar ghost hunters in The Innkeepers.

Now he just had to convince Paxton to shoot a ghost movie in a haunted hotel. Best known to horror fans as Mari in the 2009 remake of Last House on the Left, Paxton had been contacted by her agent about West's script, but she was already booked in New York to shoot the forthcoming Enter Nowhere. Three weeks into production on that film, she and her co-star Katherine Waterston walked into a bookstore when Waterston started checking her messages. Paxton said: "She asked, 'Do you know Ti West?' And I was like, 'Oh, I totally forgot about that meeting I was supposed to have.' She goes, 'He's one of my really good friends, and he's texting me. You should talk to him.' It was just so weird – six-degrees-of-Kevin-Bacon weird." She was quickly sold on the project, but there was just one issue: West's choice of location. Paxton said: "When he first told me about it, I didn't really think about it. I just thought, 'Wow, this is just so amazing that he would come up with that concept.' Then a week before I was supposed to leave, I thought: 'Wait a minute. This is it; I'm going to the creepy hotel. Crap.'" The cast and crew took over the Pedlar for the five-week shoot, living where they were shooting, and they soon put West's true-life supernatural stories to the test. Sleeping in room 333, Paxton would find herself suddenly waking up bolt upright in bed. Other times, her bathroom door would spontaneously burst open. "I'd just stare at it, and I'd look to my window, and my window would be closed. I'd say to myself: 'It's the wind. It's got to be the wind.' I'd count sheep and try to go to sleep and hug my Chihuahua."

“If [the Yankee Pedlar owners] had said no, I would have just thrown the script away, because I don’t think I could have filmed it anywhere else.” - Ti West
The building is not the only character that West owes to House of the Devil. The role of former-soap-actress-turned-clairvoyant Leanne Rease-Jones (Kelly McGillis) was inspired in part by Dee Wallace, who played House's landlady. West called the E.T. star "a delightful, wonderful woman," the opposite of Rease-Jones' jaded ex-celebrity, but she still caught him off-guard. West recalled: "I was telling her that this hotel is very kooky, and people say it's haunted. She got very serious and told me it is haunted and that she's a spiritual healer now and she can communicate with the spirits. It blew my mind." That was not the only supernatural surprise awaiting him. All through the House shoot, the cast and crew were plagued with bizarre, vivid dreams. Two years later, West said, "The line producer Jacob [Jaffke], who was already there, texted me as I was getting on the plane and said, 'The dreams are back.' Within the first two nights of me being there, it was happening again."

For all the strange goings-on, West wanted to keep the inn firmly grounded. After all, Claire, Luke, and the guests are only there because it's a working hotel. Again, he was inspired by personal experience. When his debut feature, The Roost, screened at South by Southwest in 2005, West's day job was selling jeans in a mall. "I can make movies, but I'm not qualified to do anything else," he said. "I've had all these crappy jobs, so it was really important to get the vibe of: 'You're at work, and you're sitting there, and you have these weird relationships with these people that you work with.'" That sense of workaday reality is part of the reason West has become associated with the mumblecore scene. The day after The Innkeepers has its world premiere at the Paramount, he appears onscreen next door at the State in werewolf meta-drama Silver Bullets. That's directed by mumblecore mainstay Joe Swanberg, who also directed Hannah Takes the Stairs, the star of which, Greta Gerwig, met a memorable end in House of the Devil. Sharp-eyed aficionados of the genre will spot an Innkeepers cameo by Lena Dunham, star/director of SXSW 2010 award-winner Tiny Furniture. Aside from all being friends, West said, "We have the same taste and aesthetics, so it's a real pleasure to work with them." Those relationships began at SXSW 2005 when West met Swanberg, who was creating festival buzz with his first feature, Kissing on the Mouth. Jump forward a few years and Swanberg was struggling with his new (and at that point monster-free) script while West was staying with Dunham during post-production on House of the Devil. In yet another lucky coincidence for West, he recalled that Swanberg told him: "I've got this new idea, and you're the only one still around. Will you be in it?"

For Paxton, the most unnerving coincidence around The Innkeepers was far from supernatural. Since Torrington is a very small town, the film was the big news there, and she had gotten used to locals checking out the shoot. One day she was hanging out on the hotel stoop and a woman and her husband dropped by to chat. Paxton said, "She's telling me, 'Y'know, me and my husband got married here.' I was like, 'Oh, really, you don't say,' and she said, 'Oh yes, we conceived our first son in this hotel.' Oh, cool, too much information." What shook the actress to her core was when the lady told her the room of conception – room 333, which just happened to be Paxton's room. "That's a whole different creepiness." 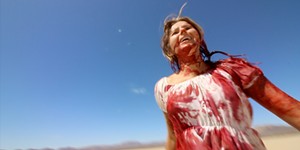