Eye of the Storm

The creative vision of an album cover art pioneer 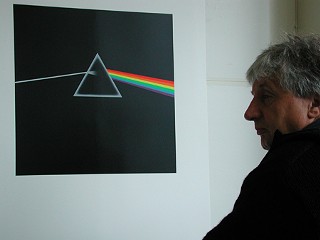 Taken by Storm opens in a dream. For exactly one minute, a helicopter flies over Saunton Sands in North Devon, England. The crystal beach is littered with roughly 700 empty hospital beds and stretches for what seems like miles. The scene's quite obviously the cover shoot for Pink Floyd's 1987 album, A Momentary Lapse of Reason, but viewed from this aerial angle, the seashore looks like heaven's hospital ward, profoundly elegant and breathtakingly absurd.

The sequence serves as the perfect introduction to Taken by Storm: The Art of Storm Thorgerson and Hipgnosis, a long-overdue documentary on the British graphic designer and his esteemed company. He's the last of the great surrealists, an incomparable visionary whose iconography has branded the work of everyone from Led Zeppelin, Paul McCartney, and Alan Parsons to the Mars Volta, Muse, and, most recently, the Steve Miller Band. In fact, it'd be more difficult to name a classic rock band he didn't work with.

The beach facade's also telling of Roddy Bogawa's level of dedication. The New York director tracked down the unreleased footage from the Pink Floyd camp after noticing an 8mm-film camera in one of Thorgerson's contact sheets. Taken by Storm offers all sorts of similar archival delights for vinyl junkies, as well as intuitive insight from most of the aforementioned bands and countless others.

Even more impressive, though, is the documentary's narrative streak, which places Thorgerson's personal history within the context of technological advances and the changing face of the music industry (thanks in no small part to the editing by Austin veteran Karen Skloss). Taken by Storm is a sublime portrait of the method behind his madness.

"People already know the covers," stresses Bogawa. "We wanted to show the man behind them and the process of it all."

Austin Chronicle: Where did this process start for you?

Roddy Bogawa: I met this musician named Chris Brokaw. ... We were having dinner later, and he just happened to mention that he had just been at Storm Thorgerson's studio. I had no idea who that was. "Is that like some Finnish rock star or something?" ...

Then I went online and bought this old Hipgnosis book called [The Work of Hipgnosis:] 'Walk Away René' that was long out of print. I started flipping through it and just freaked out at how many of those records I had. I started really becoming obsessed with who this person was that shaped my teenage adolescence so much. ... I basically just started writing Storm, telling him that I was interested in doing a film about his process and things like that. He didn't respond for months. So I kept sending different proposals, one that talked about the art world, one that had a lot of pictures, and then finally I wrote this stream-of-consciousness narrative of seeing Pink Floyd as a kid, and my dad driving us in his VW bug to the show. That's the one that finally got a response.

AC: Some people described working with him as a challenge; others weren't quite as polite. I believe the phrase used was "slave driver." Do you feel like you were able to capture some of that on film?

RB: He is at odds with most people. He always has these challenging designs that are a lot of times antithetical to the marketing of records. He did one for the Cranberries where not only did it not have the name of the band or the album on the cover, but he refused to let them put a bar code on it. He's always challenging, but people that work with him love him. That's why so many people are a part of the movie. Even with all of the issues around it all, they love and respect him. ...

A lot of times, there's a lot of pressure: getting the props, meeting the deadlines of the record companies, and coming up with creative solutions. Literally, the last time I was in London to shoot him at this gallery, I showed up and he said, "Put your film gear down." So I did. Then I was on a ladder helping him hang the show, tying these branches to the wall. That's what it's always like around him. There's like this whirlpool of stuff.

We always joke about it, but you do get sucked into the vortex of the storm.

Storm Thorgerson and Roddy Bogawa will give a talk at the Blanton Museum of Art on Saturday, March 12, 6pm. Domy Books will also host a booksigning event on Monday, March 14, 7pm.

Taken by Storm: The Art of Storm Thorgerson and Hipgnosis