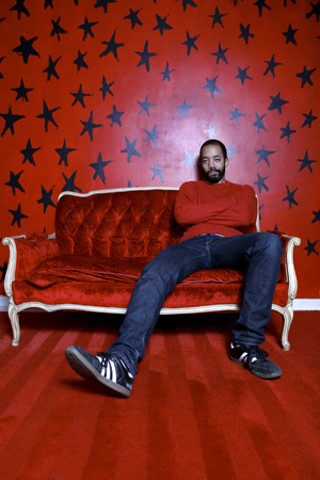 Sure, you can see Wyatt Cenac more or less four days a week on The Daily Show With Jon Stewart, where the actor and comedian works as a writer and on-air correspondent. But that's box-sized Cenac. Tonight, Thursday, March 10, the Dallas native will be in the flesh, in actual person-sized dimensions, to host the Texas Film Hall of Fame Awards, which will induct Rip Torn, Renée Zellweger, John Hawkes, the cast of Friday Night Lights, and Spoon into its hallowed (if entirely figurative) halls. Cenac took a few minutes out of, by his own account, a "nutty schedule" to chat about his hosting strategy and his whirlwind trip to Austin.

Austin Chronicle: I'm curious what kind of approach you're going to take. I don't know if you know this, but Ann Richards was a longtime host of the Texas Film Hall of Fame Awards. You think you might go gubernatorial?

Wyatt Cenac: I'm not sure. It's kind of tough to follow the governor. As far as [the show] goes, it's not particularly about me. I have a feeling that people who are there, they're there because of all the things that the Austin Film Society has done. And so I just see myself as a palate cleanser to kind of move the evening along more than anything else. Palate cleanser's not even the best word. I'm just the oil that keeps the train moving. So I think my goal is to hopefully stay out of the way so people can see the people they really want to see. They really want to see Renée Zellweger. Let's be honest.

AC: You think? I bet some people want to see you, too.

WC: If it's between me and Renée Zellweger and the folks from Friday Night Lights, I have a feeling I get pushed out of the way.

AC: Since you mentioned some of the inductees, I did want to ask if you've been boning up on everybody's body of work. Are you doing research here?

WC: I .... (long pause) I mean, I'm familiar with their work. I'm hoping there's not going to be any sort of quiz or one of those movie games where I have to guess "who said this in what movie."

AC: I know you're supposed to be an impartial host, but is there anybody you're especially excited about?

WC: I think there was talk that Mike Judge might be there.

AC: That's right, you wrote for King of the Hill.

WC: Yeah. And I don't really get to see him a lot, so it'd be fun to catch up with him and say hello. When I was at King of the Hill, the fun part of that job was that every year we would take a trip to Austin and get to see Austin a little bit through Mike's eyes and also get to wander around and see stuff.

AC: Have you been here since Medicine for Melancholy premiered at South by Southwest?

WC: That's a good question. Ah ... no. That was maybe two or three years ago? That was the last time I'd been around.

AC: Are you going to get to hang out in Austin at all?

WC: Not really. I'm shooting in and shooting out. I'll be able to hang out just for like an hour or two, but I'm shooting right back out. I have to go to a friend's wedding, and then I have to go to L.A. Once I start traveling, then it's kind of like, okay, well, you go down and do this, then you go to a friend's wedding 'cause you have no excuse not to go now 'cause it's also in the Southwest, and then you go west and you go to L.A. and go do some stuff over there. I try to knock out as much as I can. Traveling to me is like .... I try to run errands while I travel.

AC: And are you going to work that into your toast at the wedding?

WC: Thankfully I don't have to give a toast. And it's probably best that that intimation stays in Austin and on this phone call.