A former exchange student reexamines her trial by fire in Brownsville 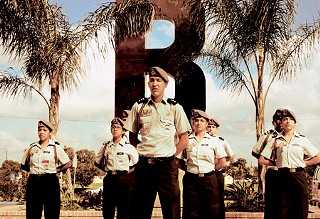 At 17, Barbara Eder was far from her Austrian home, living as a foreign exchange student with a Brownsville, Texas, family that viewed her as free labor. One day when she didn't clean the house at 5am, they tossed her luggage and clothes into the street. A desperate Eder moved in with friends from Hanna High School. "I stayed one week in my Mexican friend's household, the other week at the foster home where my friend stayed, the next week in a very rich house, the other week at a house where a gang used to hang out," she says.

That was 1995. Fast-forward to 2011 and Eder's film, Inside America, is about to have its U.S. premiere. The film follows six diverse students who are much like the teens whose couches she slept on years ago. "It is important to me that people know that I was not only watching and observing but also really living within these households and lives which I am describing in Inside America," she says.

Perhaps the reality of the film's inspiration also led to its unique style. At first glance a straight-on documentary, it morphs, closes in, and reveals itself to be a fiction of the Cassavetes school (Eder also counts Larry Clark, Gus Van Sant, and Richard Linklater as major influences). "I wanted to make people see the characters of the movie from a most realistic point of view," she says. "I thought that starting with rather documentary scenes would have a very strong impact on credibility of the characters and the circumstances they are within."

Eder spent months casting the film with mostly nonactors who were essentially portraying themselves – including gang members who were sometimes high during filming. "I wanted to find actors who are more or less what they present in the movie," she says. "So for the part of the beauty queen, I was really looking for someone who would take part in beauty competitions. For the part of the gang guy, I wanted to find a real gang guy. For the cop, I was looking for a real cop. Half a year before shooting, I went to Brownsville to find my characters. I would hang out at the high school, talk to students, ask them about their lives and, most important, listen to what they had to say."

What Eder understood was the teenage desire to belong in a border town where Mexican illegals, rich Americans, and dispirited gang members try desperately to hang on. "It seemed to me that Brownsville kids only felt they were alive if they belonged to someone," she says. "And I always wondered if it was some search for identity. In my country it was so different because everyone wanted to be individual and was interested in all sorts of groups of people."

Everywhere she went there was a gun, something she had never encountered in Austria. In many ways Eder's outsider perspective on Brownsville and the United States in general is what makes the film compelling. Her filmic eye looks on with wonder at ROTC students obsessed with guns and even more so at the ever-present metal detector that guards the high school's front entrance. It's a viewpoint that may shock Americans forced to look at their world through fresh eyes. One of the film's nicer touches is a single handgun that passes through the hands of one character after another – always a threat waiting to explode in their lives.

The film offers some comic relief through a nerdy boy named Ricky who is forced to sell cookies door-to-door to fund a school trip. Eder admits the character is very much based on her own experiences but, more significantly, is at the heart of the film's underlying message about the dangers of teens trying to fit in.

"I know that in Brownsville people from Cameron Park would never hang out or talk with people from the country club," she says. "Same thing at school. A straight-A student would never hang out with the cookie-selling Ricky. The movie gives a chance to see the struggles of different groups of citizens of Brownsville and at the same time gives you the chance to reflect and think about your own."