Will Blog for Food 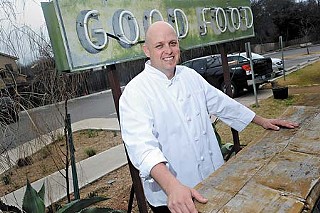 The Internet has created a democratic space for recipe sharing, restaurant reviews, and writing about food with innovative results. Take Epicurious, the free online clearinghouse for recipes published in Bon Appétit and the late, lamented Gourmet. Readers can post reviews of the recipes on the site, bringing the phenomenon of cookbook marginalia and adaptations into the era of digital writing. Online social networking has also generated the phenomenon of "twecipes," recipes disseminated via Twitter and necessarily condensed to the circumscribed 140-character limit.

And then there are those for whom eating and dining out are where it's at. Those folks can be found registering their opinions of the food and service at their favorite eateries at Urbanspoon, the much-maligned Yelp, and the local boards on Chowhound. The truly dedicated can post photographs of their meals on Foodspotting alongside their reviews. Of course, these developments in the melding of foodie and Internet cultures reveal all sorts of tensions and ruptures, as well as opportunities for engendering community; a few panels at this year's Interactive Conference help to define the dimensions of this phenomenon.

There's that old saw that says that you eat with your eyes first, hence the emphasis on making food visually appealing in restaurants, grocery stores, and advertising. But the ways in which this is translated to the Internet are of particular interest to Stacie Capone, who organized and will moderate SXSW Interactive panel The Moguls of Food Porn, featuring Nadia Giosia of the Cooking Channel's Bitchin' Kitchen and Nick Evans of the blog Macheesmo, as well as other foodies whose unique approaches to visual representations of food incite that Pavlovian response to things you didn't even know you wanted to eat.

"Over the past few years, in the midst of the great recession, all these bloggers and upstart media stars started making money by creating content around food," says Capone of the inspiration for the panel. "It reminded me of the dot-com crash in the Nineties, when all those investors in Web start-ups found out that the only sites that were profitable were porn sites. And it struck me ... food is the new pornography." The panel will explore the connections between that cupcake and its online simulacrum and the people whose photographs can send your salivary glands into overdrive. But what if you're only in it for the articles?

Perhaps the most fertile ground in the marriage between the Internet and writing about food is the food blog. Tens of thousands of food-centered journals populate the blogosphere, and their themes run the gamut from regional focus and special dietary needs to restaurant reviews and recipe testing, sometimes even providing a platform for photography, travel, and activism. Others have turned a food-blogging hobby into a professional pursuit: Clotilde Dusoulier of Chocolate & Zucchini, Deb Perelman of Smitten Kitchen, Lisa Fain of Homesick Texan, and Molly Wizenberg of Orangette have all reaped book deals from their blogs, which marry luscious photography with recipes and narratives from the authors' personal lives. Seattle-based Wizenberg, whose blog-borne memoir-cum-cookbook A Homemade Life: Stories and Recipes From My Kitchen Table was met with quiet critical acclaim in 2009, will be featured in So I Started a Food Blog, a Q&A with Emily Farris, freelance writer and casserole maven (www.casserolecrazy.com). Says Wizenberg: "I'm not interested in talking about how to get more traffic or how to make money through your blog or how to develop your brand or any of that stuff that comes up in a lot of conference discussions about blogging. I've never believed the conventional wisdom about blogging – that you have to post every day, if not multiple times a day; that you've got to have strong branding; et cetera. I'm much more interested in having a discussion about why we blog, what a blog can do, what matters about food anyway, and why any of us should write about it."

Along those same lines is the question of who should be writing about food. Perhaps the most provocative and potentially divisive panel is Bite Me – Are Ethics Gone in Food Criticism?, which contends with the increasingly blurry line between marketing and pay-for-play. There's a growing tension between the industry-vetted food writer and the amateur but aspirational blogger who maybe thinks she's a bit more legit than she actually is. Local James Holmes, executive chef and owner of Olivia, will be on hand to offer his thoughts on the uncomfortable place the restaurateur finds himself in when everyone's a critic. "We have a lot of bloggers who come in and ask for a comp meal for their food blog," he says. "To start a blog, you don't have to be accredited. Anyone can start a blog." Additionally, moderator Ben Leventhal, who founded Eater and now runs the Feast, will lead fellow journalists (both online and traditional) in a discussion on food journalism's new ethics, which in some cases aren't very ethical at all.

Of course, for every shady blogger out to cop a free lunch, there are five who are committed to using their powers for good. There are more than 200 food blogs in Austin alone, and a core number of them have formed a friendly, loose-knit community; recent gatherings included a potluck and baby shower for a well-known local blogger, a tour of East Austin food trailers, an intimate cocktail gathering in honor of visiting cookbook author Joan Nathan, and a food swap in which attendees – bloggers and nonbloggers alike – bargained for and exchanged items as diverse as homemade marshmallows and vegan soup (see "DIY 2011," Food, Feb. 18). Exchanges such as these allow foodie bloggers to teach and learn from one another as well as offer support beyond the kitchen. In many ways, the Austin food-blogging community is representative of what's taking place on a national and international scale.

"It's about connecting with other people in your city who have similar interests for the greater good of the community at large," says Addie Broyles, organizer of Building Community in a Blogger-Eat-Blogger World. "My intention is to inspire other bloggers to feel like they can bring the blogging community in their city together to make some change. The thing that links us is that we blog; the fact that you blog means that you are going above and beyond what everybody else who happens to enjoy that particular niche [is doing]."

Broyles, a food writer and blogger for the Austin American-Statesman, is a bellwether for the Austin food-blogging community and has taken on an active role in bringing Austin's foodies together in real life. "I think that it goes beyond helping other people who blog. For instance, mommy bloggers, rather than picking fights with each other online and tearing each other down for the way they choose to parent their kids, they could create niche groups that could be support groups for new moms or something. With food, the gluten-free bloggers get together and create a support group that meets once a month at a restaurant that supports gluten-free eating, then anybody who's struggling with that can come and connect with other people who are going through the same thing, even if they don't blog. So this is applicable to all kinds of bloggers, not just food bloggers."

In 1989's Appetite for Change: How the Counterculture Took on the Food Industry, a groundbreaking survey of the '60s countercultural food movement, Warren Belasco writes, "Food would have to be viewed not merely as a commodity to be rationalized or a set of nutrients to be metabolized, but as a medium of communication, a symbol of a whole way of life, an edible dynamic." Food is a universal experience. Not everyone has equal access to high-quality, well-prepared food, nor do they have the same tastes or values regarding what they put in their mouths for sustenance. But food has the power to bring people together, whether it's warring nations at a state dinner or out-of-town friends topping off a night of drinking and music with decadent doughnuts bought from an Airstream trailer. The way we prepare, talk about, and take action regarding food within the context of the Internet is a reflection of our culture, an edible dynamic for the Digital Age.

Building Community in a Blogger-Eat-Blogger World

Bite Me – Are Ethics Gone in Food Criticism?

So I Started a Food Blog