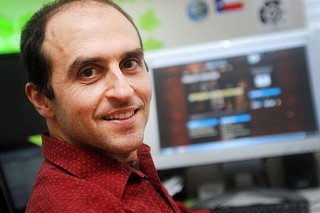 Filmmaker George Lucas is territorial. He's already been involved in several legal tussles regarding the use of characters, terms, or likenesses from his blockbuster Star Wars franchise. Even his fans are not immune from Lucas' watchdog protection: When fan-fiction began to appear, Lucas did not think twice before swatting the very hands that had dug into their wallets to lay down the cash that would eventually make Lucas the multibillionaire filmmaker he is today. But time and perhaps fatigue have changed things. Media watchers took note when Lucas recently gave his blessing to Seth Green and Seth MacFarlane, each of whom paid homage to Star Wars and Lucas in their respective animated TV series, Robot Chicken and Family Guy. And Star Wars: The Clone Wars is now in its third season on Cartoon Network. While produced by Lucasfilm Animation, Lucas is not the driving force behind it – but you can bet the rent money he has final approval on anything that hits the screen.

But what if things had been different?

Rewind, if you will, to 1977. What if a young George Lucas had access to the social media we have today and started a website encouraging users to help realize a story that takes place in a galaxy far, far away by providing some ideas as to how and why the characters interact? What do they look like? What do they wear? What music do they like? How do they change and evolve? In short, what is their story?

That "what if?" scenario is happening now on cable TV with the premiere of Bar Karma, a crowdsourced sci-fi TV show about a "mystical watering hole at the edge of the universe." Haven't heard of it? Austinite Moses Silbiger has. His idea was among the first fan-generated episodes to be accepted and produced on the new Current TV series. Launched by Al Gore in 2005, Current TV has been blowing up as of late with the recent hire of former MSNBC newscaster Keith Olbermann. Bar Karma may be the thing to bump the burgeoning network to the forefront of the cable rabble because of the series' unique development approach: It depends on fan input to drive and shape the story before it airs.

In an era when a film force like Lucas and TV titans like Matthew Weiner, David E. Kelley, and David Simon are practically brands of their own, the idea of a "community-developed" TV series is both intriguing and potentially disastrous. What's that they say about too many cooks spoiling the broth? But Bar Karma has two powerful anchors. The first is Albie Hecht, former president of Nickelodeon and onetime creator and president of Spike TV. He has since launched the digital entertainment studio Worldwide Biggies to create interactive material for use across multiple platforms (TV, film, licensing). The other force is video game designer Will Wright. The "gamer God" is best known as creator of SimCity and The Sims and is widely credited with advancing open-ended simulation games, which allow users to manage and develop communities and inhabit them with characters of their own creation. Bar Karma has been in active development online since late last year through its website (www.current.com/shows/bar-karma), social networks like Facebook and Twitter, and a free iPhone app, with the show's creators soliciting input on creative and technical aspects of the series.

"Viewers will be asked to drive everything from initial storylines to art direction," according to Current TV press materials. "If their submissions are used, that viewer's name will be on the credit roll at the end of the show." As for the story lines themselves, Wright has developed an "easy-to-use" application called StoryMaker. Accessible at the Current TV website, the application takes users through the entire process of creating an episode from pitch to story development to storyboarding. "Easy to use" may be in the eye of the beholder. As one online participant remarked, the whole thing can be bewildering. Helpfully, user forums (including one specifically for newbies) provide tips with a rah-rah spirit. Once the initial information overload is bypassed, it's all a matter of creating, critiquing, asking questions, and finally, offering a potential story for Bar Karma. Producers select the most promising of the community-developed stories and then ask the online community to vote on what goes into production for the next 30-minute episode.

The premise of Bar Karma is a take on the "man walks into a bar" story. But the bar in the title isn't your run-of-the-mill pub. It's a place characters – usually at some crossroads in their lives – walk into by chance, luck, or destiny. Is it purgatory? Are they dreaming? In the pilot episode (which premiered Feb. 11), it's unclear. What's known is that there are three constant figures at the joint: a 20,000-year-old bartender named James (William Sanderson); the bar's waitress, Dayna (Cassie Howarth); and the bar's owner, Doug Jones (Matthew Humphreys).

The 12-episode series is already well into production, with Silbiger's story selected as the basis for episode three. (Read a review of Bar Karma and a description of Silbiger's winning storyline in "TV Eye," p.46.) Silbiger's participation in the Bar Karma process was nearly tailor-made. As a personal leadership consultant, his Press Play To Grow! project actively looks at ways to expand video games' purpose and applications to "skillfully leverage and balance three synergetic variables" – entertainment, popularity, and personal growth, according to his website. When he accepted the Bar Karma Facebook page invitation, he thought it looked like more grist for his research.

"I love the Internet and online communities, the connection of video games and social media," he said in a phone interview from his Austin home. "It was a lot of fun seeing how the [Bar Karma] process worked, getting into forums, and meeting new people. I made a lot relationships there with some very interesting people." While the exact number of regular participants at the Bar Karma site is unclear, Silbiger says he interacts with a core group of six people who serve as coaches, critics, and sounding boards for one another as they develop potential stories.

"I research video games, but this is fun for me. When I get into the forums, I don't see time pass."

So does Silbiger see himself as the next media titan in the tradition of Lucas or Weiner? Not exactly.

"I feel like the main compensation is for the story to be out there, where thousands if not millions of people will see it," he said, adding, "This was created in an open-source community."

In other words, there's no royalty check down the road for Silbiger for sharing his creative capital. And this may be where conventional TV making and the gaming world come to, shall we say, an interesting juncture. While conventional TV has struggled to fully realize the power of new media, it remains steeped in its Old World approach to creation with a top-down structure in which viewers are passive participants there to watch the show and, significantly, to be exposed to commercials. If the series is a critical and artistic success, that's the cherry on the sundae. And all that excitement over interactive TV, wherein viewers could buy the same sweater they see a TV character wearing with a click of a button? It's never taken off. Media consumers these days really don't want to be sold a bill of goods. They want an active experience beyond point, click, and buy.

The Bar Karma model still has two very distinctive production leaders in Wright and Hecht, but it's the gaming aspect that excites fan-creators, which requires seeking, listening, sharing, learning, and collaborating – all the things visionary game designer and South by Southwest Interactive alum Jane McGonigal advocates in her new book, Reality Is Broken: Why Games Make Us Better and How They Can Change the World.

Can gaming-design techniques make for better TV, or at least offer a new approach? For his part, Silbiger says yes.

"[Bar Karma] adds social media to TV and video games, all in one package."

The only thing left to build is a larger audience.