Tweet
print
write a letter
The Austin Film Society has revealed two more additions to its already star-larded 2011 Texas Film Hall of Fame Awards lineup: Joining previously announced inductees Renée Zellweger and Rip Torn and emcee Wyatt Cenac (The Daily Show With Jon Stewart) will be John Hawkes, the formerly Austin-dwelling character actor emeritus/now newly minted Academy Award nominee (for Winter's Bone), and indie-rock icon Spoon. Austin writer/director Jeff Nichols will present the band with the Soundtrack Award. Puzzled by the pairing? Nichols directed Spoon's 2007 Tokyo-set "Don't You Evah" video... Speaking of far-flung adventures, Austin filmmaker Bob Byington dropped us a line over the weekend from Down Under, where he's wrapping up a 20-month tour with Harmony & Me. "Was stopped by customs in Australia, they thought it odd that I was routed through Hong Kong, and asked me a lot of questions – they did not ask me if I had a condom stuffed with heroin in my ass, but the clear subtext for the questions was – get one of these wrong and we're checking up there," he wrote. The deadpan writer/director will shoot his next feature – Somebody Up There Likes Me, "a comedy about getting old and dying" – in July in Austin, with Nick Offerman (Parks and Recreation) starring... Let's skip continents: As previously reported on the Picture in Picture blog, Zack Carlson and Bryan Connolly have optioned their vampire-hunter-in-Eastern Europe script Destroy to Best Worst Movie filmmaker Michael Paul Stephenson; his partner Lindsay Stephenson and Jennifer Roth (Black Swan) will produce. The boys are Bavaria-bound come late summer, when production is set to start. "There'd been some discussion about using Romania because it's so picturesque and old and there's some beautiful architecture," Carlson, a longtime Alamo Drafthouse programmer, told the Chronicle last week. "But then we found out from people who'd done production there that it's really rugged. Like, there's human waste and strange new insects coming out of the faucets and stuff like that. So Bavaria won." 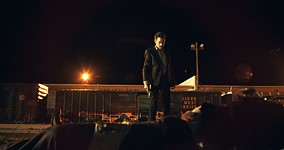 SXSW Film Reviews: 'We Cause Scenes'
Daily Reviews and Interviews 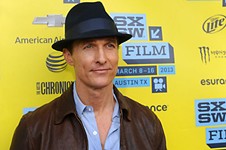