Matthew Perry, funny if not quite sunny, returns to TV 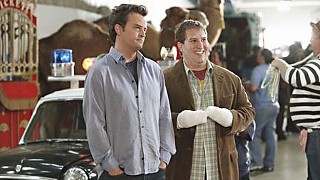 Perry isn't exactly the most versatile actor. You pretty much get the same thing no matter which way he's tossed, but his bag of tricks is always interesting and fun to watch. In Mr. Sunshine, he plays Ben Donovan, a mildly dyspeptic manager of a San Diego-based sports arena. Every week, it's a different party: the circus, a basketball game, a rock concert – you name it, and he's there to make sure it all comes off without a hitch, that the talent and especially the attendees have a good time. Donovan is young, in his prime, and making a good living at a job he's good at, but by God, he's unhappy. Well, not depressed, can't-get-out-of-bed unhappy. It's more the "Is that all there is?" kind of unhappy.

Admittedly self-involved, he decides that he must discover what will make him happy. It's his job to make sure all who come into the Sunshine Center have a good time. Maybe there is something he can do to experience some of that good cheer, too.

Fortunately, Perry's Donovan isn't as much of a crank as he would like to think he is. Would a curmudgeon care whether his boss (Allison Janney, The West Wing) and her son (Nate Torrence, She's Out of My League) make amends? Would a true grouch care if his co-worker with "benefits" (Andrea Anders, Better Off Ted) makes a break for it to enter into a serious relationship with his best friend Alonzo (James Lesure, Las Vegas)? And why bother having a best friend, especially one who is so darn upbeat and amiable?

No, Ben Donovan has a few more things to learn about life and the pursuit of happiness, and audiences get to go along for what looks to be a fun ride. As if that weren't enough, the ride includes a delightful and unexpected turn by Janney, who nearly steals the entire show as the owner of the Sunshine Center, making cringeworthy public relations gaffes while operating under the influence.

Austin-based filmmaker and 2010 South by Southwest Film Festival honoree Amy Grappell is getting some play on HBO2. Her award-winning short "Quadrangle" gives an up close and personal account of her parents' marriage in the 1970s, when they began partner-swapping with another couple in their small Long Island community. While at first searching for an alternative to divorce and thinking of their actions as revolutionary, the logistics of cohabitation, child rearing, local gossip, and the messiness of the human ego soon come into play, deflating their once-utopian vision. Using still photos and split-screen interviews with her parents (now estranged), Grappell explores how story and memory coalesce and deviate.

"Quadrangle" premiered at the 2010 Sundance Film Festival, where it received a Honorable Mention Jury Prize. It later won Best Documentary Short at SXSW, Best Live Action Short Film at the American Film Institute Film Festival, Best Short Film at the Dallas International Film Festival, and has screened at high-profile venues such as Hot Docs and the Museum of Modern Art's New Directors/New Films Festival. As a result of her short film, Grappell is currently at work on a feature film examining group marriage. (You can check out the film's website at www.quadranglefilm.com.)