Divination or hallucinogenic drug? Whichever way you look at it, 'The Spirit Molecule' is gonna move you.

"Not all drugs are good. Some of them ... are great. Just gotta know your way around them is all."

You may have heard of the drug – or, in less fraught terminology, "psychoactive compound" – dimethyltryptamine, aka DMT, but what you probably don't know about it could fill volumes. Or a documentary film, in the case of the Austin-produced The Spirit Molecule, which was written, directed, and co-produced by University of Texas Radio-Television-Film grad Mitch Schultz. Schultz's passion for the subject came about as a result of a single dose of DMT. The resulting 15-minute trip into another realm of consciousness, he says, changed his life for the better, forever.

It's probably relevant to note here, for casual dabblers (and this being Austin, there's plenty of dabbling going on), that DMT is a federally classified Schedule I drug. That aside, DMT has been gaining passionate, degreed adherents in the West for decades and, unsurprisingly, has been a key ingredient in ayahuasca, a tea brewed by indigenous Amazonian shamans for thousands of years. Altered states? Ken Russell has nothing on this stuff.

A chemical compound found in virtually all living things – plants, animals, even comedian Joe Rogan (who appears in Schultz's doc) – DMT is starting to look like the LSD of the post-millennial age of anxiety, but minus the Joe Friday freak-outs and hippie hysterics of the sugar cube generation. Which isn't to say that seeing god, the universe, and the innate connectivity of all things might not mess with your head a bit, but apparently that's the risk you take when you shake the pillars of consciousness. Bill Hicks, wherever he is, is doubtless smiling.

The Austin Chronicle spoke with Schultz about his film, his experience with DMT, and his utterly unique take on the "remix" distribution of The Spirit Molecule.

Austin Chronicle: How were you introduced to DMT?

Mitch Schultz: It was in New York right before my last year of grad school. A friend of mine was going back to Brazil, and they had a small group of people get together at their house and one of them brought some smokable DMT. I had never heard about it before, although I had had plenty of other psychedelic experiences to that point. I just hadn't heard anything about DMT, which surprised me. They said: "I can't tell you what's going to happen, but I can tell you it's going to come on really quick. Do you want to do it?" I thought, well, I'll give it a shot. I smoked it, and within 30 seconds it was full-on. The guy that had administered it told me later [that] "I've never seen a look of fear on somebody's face like I saw on yours for the first two minutes."

AC: That doesn't sound like a whole lot of fun.

MS: I had a full dying experience. I literally felt like I was dying, but then once I settled into the experience, it was the most beautiful thing I had ever seen in my life. It completely changed how I look at the world, how I look at other people walking down the street, how I treat other people and the world in general. It gave me a complete sense of connectedness.

AC: Was your experience similar to those related by other DMT users in the documentary?

MS: I would say yes, I had very similar experiences to what was described in the film. You can describe god in a million different ways, and I had that sense [of the divine] that a lot of [DMT users] talk about. [DMT] raises a lot of questions because these states [users enter into] seem to be very similar and seem to cut across all major religions, all manner of spiritual states, and various forms of visionary artwork. In general and what I've found is there is a commonality that goes through all these experiences.

AC: How did the documentary come about, specifically?

MS: There was something that just clicked as soon as I came back from that first experience. I said, "I'm making a movie about this." And that immediately started four years of research that I had never even thought of getting into, from consciousness to psychedelics to everything in between. DMT was the only substance that I had ever tried that I didn't want to try again. This thing just stopped me in my tracks. I quickly came across Dr. Rick Strassman's book, DMT: The Spirit Molecule, and realized that this would be the perfect way to tell the DMT story. I knew there had to be a scientific aspect that would act as a framework so that people in the general culture could be able to digest this. I contacted Dr. Strassman, and we worked together for about a year to set up the project.

AC: Was he amenable to the idea of the documentary?

MS: He was, although he had had people come to him before with the idea to do a documentary, and nothing had ever really worked out. But once I went out to Taos, New Mexico, where he lives, and sat down and discussed my idea for the documentary, he was like, "Let's do it."

AC: The finished documentary is so packed with information and interviews that you really need to see it more than once to process it all. You managed to interview, it seems, everyone of any import who is involved in the study of DMT, from rabbi and kabbalah scholar Joel Bakst to University of California – Santa Cruz mathematician Ralph Abraham and writer Douglas Rushkoff.

MS: It's been a run-and-gun, completely independent process the entire way. I think the main thing that really helped us was the online viral marketing, which we started roughly three years ago. Our Facebook page has roughly 75,000 people on it. As far as the interviews, it was really just a case of meeting people, interviewing them, and then moving on to the next. Every time we got a little chunk of money, we'd go shoot someone or go down to Peru to shoot or whatever. One of my big investors had his DMT experience in Peru, and he ended up building an entire shamanic healing center down there.

AC: Ultimately, what would you like audiences, particularly those unfamiliar with DMT, to take away from The Spirit Molecule?

MS: I'd like to dispel some of the misinformation and myths that have been out there since the Sixties and Seventies about what these compounds can really bring about. Beyond that, however, I think we're really just looking at this new paradigm of consciousness. And not just the psychedelic aspects, because those are really just a tool to get you to look at these other states of consciousness. That aspect of it is very similar to meditation, fasting, and other things [that] have been a part of human culture forever. I'd like people to open up to the fact that it's just not this material world that we live in and there are other influences, from emotions to plant life to everything in between, that influence every single aspect of our lives.

AC: You're self-distributing the film [available at www.thespiritmolecule.com] and releasing the unused interview footage online, via Creative Commons, for use in a "remix project," right?

MS: Right. We printed up a handful of DVDs to get the word out, and we're currently mapping out a U.S. tour. As far as the remix project goes, we have such a wide collection of interviewees, great visual effects, really good music, and an audience that's global and wants to see this information. So what we're going to be doing is allowing them to go online and play with all the different stories that are there to create their own stories and make their own DMT films. We left over half the people we interviewed out of the film for various reasons, and in the end we only used roughly 1 percent of the footage we shot.

AC: Essentially you're hoping for the filmmaking equivalent of a DJ remix.

MS: I look at the world through the lens of complete connectivity. And it's changed me in the sense that I'm much more aware of the food that I'm eating, the exercise I get. Things like that. I was never a religious person, but I'm a heavily spiritual person at this point – even [with] something like going out for a walk in nature and just pausing and seeing the beauty that's there. 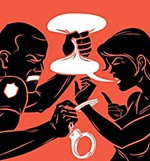 Top 10 Most-Viewed Stories on AustinChronicle.com
Notes on our virtual relationships