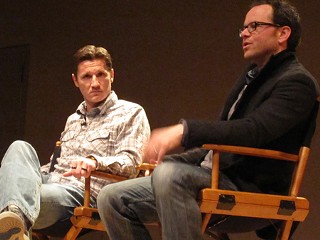 Could it be that the Conversations in Film talk hosted by the Austin Film Festival last Sunday was the first in the series that focused on television? AFF Conference Director Maya Perez wasn't absolutely sure. And given that working in television – specifically, writing for TV – has become among the most sought-after panel topics at its annual AFF conference, it seems an oversight. If so, the double-bill featuring Noah Hawley (My Generation, formerly on ABC) and Kyle Killen (Lone Star, formerly on Fox) was a great launch of what should be an ongoing thread in the speaker series.

Of course, one of the difficulties of getting successful TV writers to make these kinds of appearances is that, most of the time, they're working. Fortunately – at least for the eager audience gathered at the Harry Ransom Center at the University of Texas – both Hawley and Killen are fresh off series cancellations and between gigs. A potential gig may be leading the selection panel at the 2011 AFF Screenplay and Teleplay Competition, which will now, for the first time, solicit pilot submissions.

"I lean toward pilot script [samples] when I hire writers," Hawley said. The more seasoned of the two young scripters, Hawley cut his teeth as a staff writer during the first and second seasons of Bones (Fox), moving on to executive produce The Unusuals (ABC). "[Pilot scripts] show the full range of a writer," Hawley continued. "Can [the writer] create scenes, good dialogue, and develop characters? Does the writer create a voice that pops in the script? I look for humor, too, because a good sense of humor shows intelligence."

Would a pilot script submission to the AFF Screenplay and Teleplay Competition help a new writer move on to bigger and better things? Their own series, perhaps? Stranger things have happened.

"Hollywood is like a fortified castle," Killen said. "It has no visible entrance but all kinds of crazy places where you touch the wall and a door opens. And then, once inside, everyone is thrilled you're there. No one likes anything more than to find that next new voice."

Are you the "new voice" of Hollywood? Find out by entering the AFF Screenplay and Teleplay Competition. The early deadline is May 15, the final deadline is June 1.

A slew of launch dates for new and returning series occur after the Super Bowl, but here's a smattering of pregame offerings:

Feb. 4: The Defenders returns to a new day and time slot, 7pm on CBS. Who Do You Think You Are?, 7pm on NBC. Season two of this Lisa Kudrow-produced series follows celebs as they discover their roots. All seven episodes from the first season are currently airing on NBC.com for a limited time.

Get Ready for Oscar

Turner Classic Movies is celebrating this year's Academy Awards season with a full month of Oscar-worthy films with its annual 31 Days of Oscar event. Each evening of this year's showcase will feature some unusual bit of trivia linking the evening's films together, as in a programming block devoted to the most nominated male actor (Jack Nicholson, Feb. 2) or to husbands and wives nominated in the same year (Elsa Lanchester and Charles Laughton, Elizabeth Taylor and Richard Burton, Feb. 2 and 3) or to films that garnered the most nominations but walked away empty-handed (Feb. 8). Each night ends with a Best Picture Oscar winner.

31 Days of Oscar begins Feb. 1 and continues through March 3. Check local listings or go to www.tcm.com for a full list of films. The 83rd Annual Academy Awards presentation will air live on ABC at 7pm on Feb. 27.