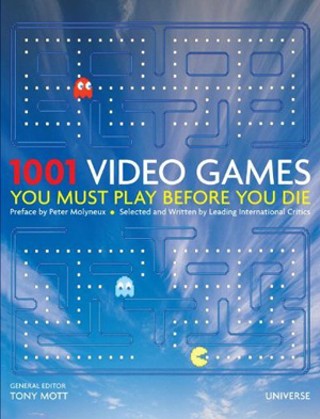 1001 Video Games You Must Play Before You Die


Universe Publishing apparently has a thing for numerology. It's given the 1,001 treatment to not only video games, but books, songs, albums, and beer. And while limiting the number of songs that must be heard to four digits would obviously be an interminable struggle, I wonder if there wasn't a bit of scrambling to find 1,001 truly noteworthy video games. Not to sound like a game snob, but six entries for Resident Evil and the original Excitebike gets snubbed? But isn't that the draw of list-oriented bathroom books such as this: Everybody loves to debate the intelligence of writers and editors who would dare include the overrated "X" and neglect to mention the brilliance of "Y." It's human nature.

The book's creators decided against ranking the entries, instead separating the games according to decade. The entries are listed in order of their release dates and include basic info and approximately 200 words describing the games and their merits. The book starts out strong with a history lesson detailing the 1970s foundation-laying games, followed by an exploration of the creative explosion of the 1980s. What's most compelling about these early titles and the stories behind them is that developers couldn't meet or defy expectations, because there were none.

It's a shame that these two decades only get the reader to page 177 of 960, especially since the book's readability tapers off as the Nineties approach. It goes without saying that the latter years of game culture are lousy with truly great titles and the writers who have been wrangled for this compendium are some of the best. But by the time you get to writing about the Final Fantasy series for the 11th time, there really just isn't much left to say. The blurbs start to blur together, and the reader finds skimming the titles and perusing the vibrant pictures more rewarding than dipping into the description of Rebelstar: Tactical Command. It's also interesting to note that the releases included in the chapter devoted to 2010 look surprisingly similar to the 8-bit titles of gaming's early days. Coincidence?

There are gems throughout and lesser-known titles readers will want to hunt down (many are downloadable on modern systems), but 1001 Video Games ultimately serves as a nostalgia trip in gaming's DeLorean, especially for those of us old enough to remember playing Moon Patrol in the Eighties.

gaming, 1001 Video Games You Must Play Before You Die, Excitebike, Resident Evil